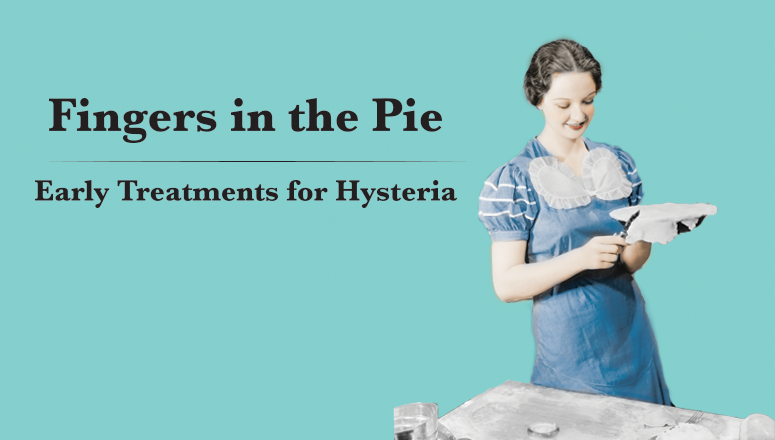 You are here: Home / Midlife Sex / Fingers In The Pie: Early Treatments for Hysteria

“You know that look women get when they want sex? …Me neither.”

From a practical stance, labeling Hysteria as a female sexual disease took a lot of pressure off of clueless men. If a woman was frustrated by a lack of orgasm, it was her fault and not the â€œwham, bam, thank you maâ€™amâ€ attitude of husbands and lovers. Lord knows male sexual prowess was not (is not?) to be questioned, so it was convenient to send the cranky ladies off to seek medical attention.

Doctors enjoyed the financial profits of chronic hysteria, but not the lengthy treatment sessions. After all, it is hard to treat what one does not understand. Until the eighteenth century, a constructed vocabulary of female anatomy did not exist. Confused by womenâ€™s genitals in conjunction with hysteriaâ€™s behaviors and symptoms, physicians suggested relief might be obtained by spirited bumpy buggy rides (say that three times fast!), swinging, horseback riding, or if applicable, frequent intercourse between a husband and wife.

The Technology Of Orgasms

Interestingly, the very â€œsymptomsâ€ that garnered the diagnosis of hysteriaâ€”like too much bicycle ridingâ€”were often the suggested cures albeit now under the careful instruction of male doctors. Much to the chagrin of physicians, however, the best results for treating hysteria were consistently garnered via finger-numbing pelvic massage. Why the chagrin? Reaching hysterical paroxysm (orgasm) through manual massage often took upwards of an hour or more; which became a scheduling and profit-making concern. Therefore, physicians deferred the vaginal massage-to-orgasm treatments to midwives whenever possible.Â  As technological advances became feasible, inventors and doctors looked for ways to mechanize the treatment of hysteria. 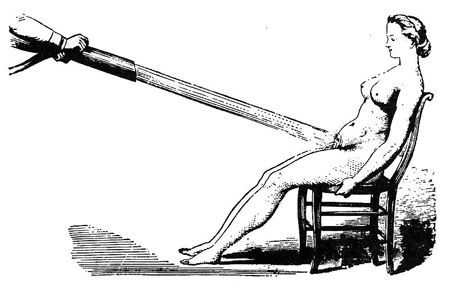 Author Rachel Maines states that as early as the 1700â€™s hydriatic devices for female disorders were in use in special â€œwomenâ€™s roomsâ€ at spas.Â  In support of this point, she cites, â€œTobias Smollett, who wrote an essay on the water cure in 1752, remarked that pumped water was good for â€˜hysterical disorders…â€™â€ (Maines p. 73)Â  By the mid-1800â€™s hydriatic massage devices were being developed and sold to medical practitioners for hysteria.Â  Unfortunately, there was a considerable downside to water massage as a medical treatment.Â  Doctors had to travel with their patients to available hydrotherapeutic treatment sites to keep the procedure on the up and up.Â  The added expense thereby limited treatment to those able to afford such care. At around this same time (the mid-1800’s), inventors began to develop steam-powered massage and vibratory equipment for female sexual disorders. The cheer from beleaguered doctors was audible, and the so-called hysterical women were not complaining either. 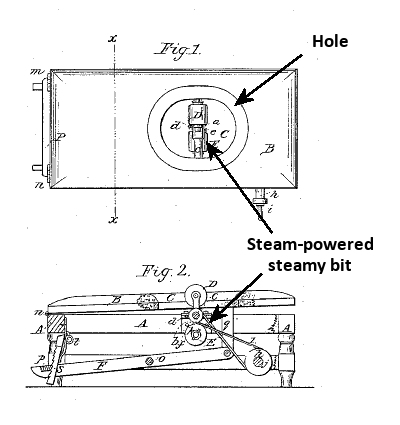 One such inventor, who was also a medical doctor, was George Taylor. Dr. Taylor developed a table with a cutout for the lower abdomen. Through a coal-fed, steam-powered drive train, a vibrating sphere massaged the pelvic area. He named his device â€œThe Manipulatorâ€ and warned physicians that women should only use it under close observation… lest they overindulge. (Maines, 1999)Â  In fairly rapid succession, inventors experimented with a myriad of medical devices aimed at treating female hysteria.

Patents were issued for specialized rocking chairs, wired apparatus that ran low electrical currents through patients, foot-pedal operated equipment with interchangeable end-pieces, and, by 1900, dozens of vibrational devices with specialized attachments.Â  The new medical vibrators were expensive, however.Â  Depending on the size, power, and optional accessories, a professional vibrator cost between $15 and $200.Â  Maines points out that a small house at the time cost about $300, so it was a considerable investment to achieve The Big â€œO,â€ er, to combat female sexual disorders.Â  Next up Iâ€™ll share how, when electricity became more common and available, hysterical women got a charge out of electrical vibrators!