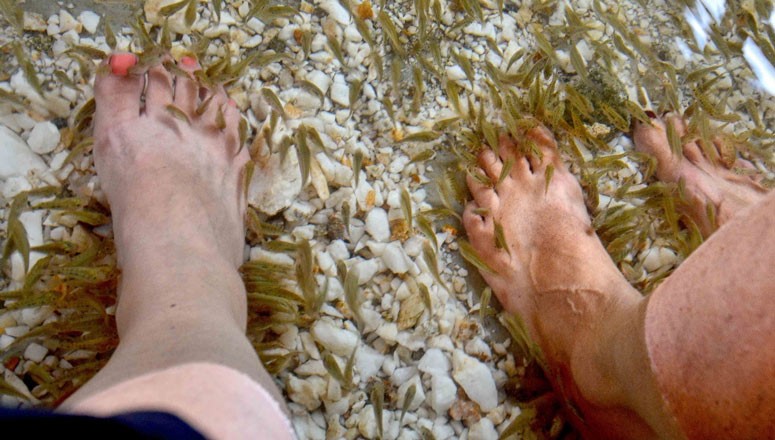 You are here: Home / Musings About Aging / Midlife Restless: Career, Personal Life, and of Course, Legs

Huh? Legs? Yes, legs. Plump, sturdy, dimply legs. And while Iâ€™m the poster child of midlife restlessness in general, I want to share with you what Iâ€™m doing to combat restless legs.

Somewhere among the other menopausal symptomsâ€¦brain fog, hot flashes, headaches, sleeplessness, and weight gainâ€¦I thought, â€œGee, surely there can be more for me to deal with at this stage in life.â€ Ping! Wish granted. (Apparently not all wand-wielding fairies have a sense of humor or are nice.)

I began having the mother of all motherâ€™s of !@#$%^ restless leg syndromes. Way into the wee hours of the night Iâ€™d be flopping my legs around in an attempt to stave off the creepy-crawly feeling that envelops my feet.Â Itâ€™s as though I am standing ankle-deep in an angry anthill.Â Â  Thereâ€™s no pain per se, just that incessant, maddening, tingling. Picture me in the Edvard Munch painting â€œThe Scream,â€ except louder and with wrinkled pajamas.

At first I upped my magnesium intake, and that helped somewhat. However, it didnâ€™t fully remove the symptoms. Then one day I read about a Tibetan Herbal Formula called Padma.

To be honest I donâ€™t have a clue how it works, or why it works, but it does. At least for me. If Iâ€™m having a stubborn bout of restless legs I take one tablet twice a day for a week or so. Once the symptoms calm down I reduce the amount to one tablet a day. I get my stash through Amazon and, although not inexpensive, the relief it provides is worth every penny. Ahhhh, sleep. Blessed sleep!

There is a small booklet called, Padma: An ancient Tibetan herbal formula, by Nan Kathryn Fuchs, Ph.D., that explains the origin and whole body benefits. Iâ€™m not sure if you could get it a library, but it would be worth the read.

All I know is that Padma helps me, and I thought Iâ€™d pass itÂ along to others who are suffering from restless leg syndrome. If you do give it a try, let me know how it works for you. I only want to recommend the best of the best!