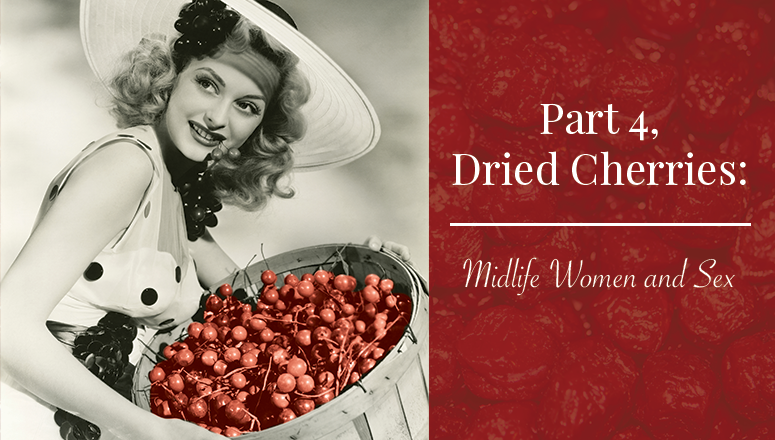 â€œSex at age ninety is like trying to shoot pool with a rope.â€

Margaret is another example of an older woman who spent much of her adult life without a partner. She found love and marriage for the first time when she was forty years old. Margaret told me that once she laid eyes on Mike at a friend’s wedding, lust blossomed in the summer heat. Or, as my grandmother put it, “They couldn’t keep their hands off of each other. It was a shameful and embarrassing thing to see at their ages.” With all that passion, it seems unfair that Margaret’s love story ended abruptly.

One lazy weekend Mike was feeling more tired than usual and decided to take a nap. Margaret joined him in bed, held him while he slept, and read a book. Mike never woke up.Â A heart attack ended their idyllic marriage after five short years. To my knowledge, Margaret remained single and without another male relationship for the rest of her life, although she was extremely attractive and had offers. She told me about some of the men who asked her outâ€”including one creepy guy who tried to force himself on her sexuallyâ€”but for Margaret there was only Mike.

I wish I could talk to her now and ask how it was being alone for so much of her life. How did she address her sexual needs in an environment of Lutheran constraint? Did she have a muscle relaxer? Was it her idea to get Grandma the muscle relaxer? I bet it was. I know Margaret thought about sex because I have a treasured memory that makes me smile to this day.

I was married at the time and in my early twenties, which meant Grandma and Margaret were in their seventies. It was butchering day, and my family had gathered at our house to process chickens for freezing. Sweat beaded on our brows and other unladylike places as Grandma, Margaret, and I stood in my tiny kitchen wielding knives over a sink full of bloody meat. It was tedious work, and niceties soon gave way as the two elderly sisters began bickering about something or other. I was listening with amusement and wondered when they would switch over to speaking German. With a mischievous gleam in her eye, Margaret looked at Grandma and then nudged me with her elbow.

“Hey Gail,” she said, “What does this remind you of?” She picked up a skinned chicken neck and slowly and rhythmically slid her hand up and down the slippery thing. My mouth dropped open in stunned awe before I burst out laughing. Grandma, of course, had the conniption of all conniptions. “Oh, for heavenâ€™s sake, Margaret! What is wrong with you? That is disgusting.”

Margaret cackled with wicked and defiant glee, and I joined her. She tried really, really, hard not to, but soon Grandma cracked a smile. At that moment I realized I wasn’t a little girl in their eyes anymore. There would be no more German language protection from matters of adulthood. They saw me as a woman and were inviting me to join the secret sexuality club that included muscle relaxers and chicken-plucking hand jobs.

One of my regrets is not asking more questions of them while they were still here on earth because there is so much about aging as a woman that I want to know. Why were they ashamed of owning vibrators to appease sexual longings? Would they have preferred a medical visit option?

Since the publishing of the book in 1996, it was unclear if the doctor was still in practice or had retired. Nonetheless, he seemingly possessed a unique and compassionate insight into the psyches of older women. It would be fascinating to know how he determined which female patients would benefit from the special room, and how the staff handled the scheduling. Â “Hello? Mrs. Nederbauer? This is the clinic calling. Did you say you want to pre-book three visits this week? My, my! Good for you! Just for our planning purposes, you didnâ€™t happen to buy the new Chippendale calendar did you?â€

In 1990, it was estimated that sixty percent of older women were unmarried and living alone (B.Doress-Worters, 1994), and the numbers are growing as life spans increase. In my youth, I was too naive to understand the challenges my grandmother and Margaret faced as good Lutheran widows desiring sexual release. Conversations about such matters were nonexistent. It was a sin. It was a weakness of the flesh. And yetâ€¦ I found that funky flashlight. Rachel Maines’ book allowed me to rethink the social climate of older women and sexual desire from a historical vantage while Dr. Betty Dobson offered me a totally different view based on her life and experiences. I want to learn more about cultural ageism and biases against women as I evaluate my aging process. Like Grandma’s closet, it’s hard to say what I might discover.

A tale of two sistersâ€¦my grandmother, Elsie, and my Great-aunt Margaret. Â How I miss their German/Lutheran shenanigans.