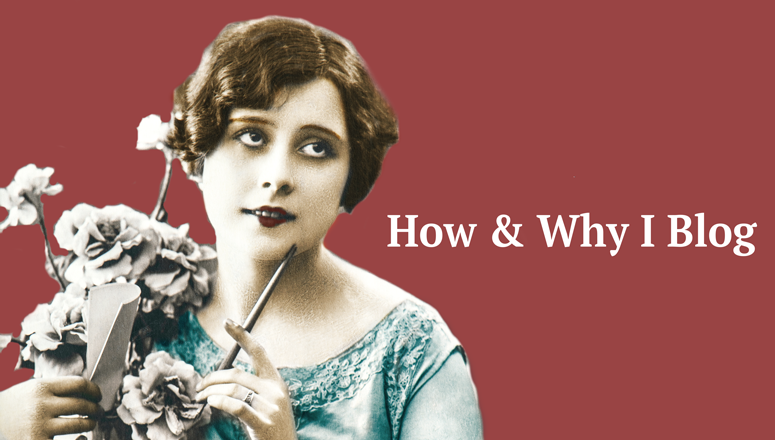 You are here: Home / Musings About Aging / Making Connections, Sharing Stories: Five Points On How And Why I Blog

â€œDonâ€™t focus on having a great blog.Â Focus on producing a blog thatâ€™s great for your readers.â€

I started my blog in 2011. Â At the time I was working on my Masters degree, and knew I wanted to start writing for my target audienceâ€”women in the second half of life. Â More specifically, I want to write for midlife women coming back into their creativity.

I did one blog a week back then, and decided to keep going, and growing. Â Right now Iâ€™m doing three blogs a week for my Aging Schmaging, one a month for the Old Hwy 61 Coalition, and Iâ€™ve been asked to do a series of six guest blogs for a group called Aging But Dangerous.Â

In some ways blogging has stayed the same, and in other ways things have changed quite a bit since 2011. Â I thought Iâ€™d go over 5 quick points as they relate to me and my blogging, and a couple of areas of confusion. Â If thereâ€™s enough time Iâ€™ll show you my website and blog, but if we run short I hope you will visit aging schmaging and let me know what you think.

So this first point is all about SEO, or search engine optimization.

Iâ€™m still not great at this as far as making sure I get enough keywords in my blogs, but not too many, blah, blah, blah. Â For me the bottom line is that Iâ€™m not writing for an algorithm, Â I am writing for people, and that is my priority. Â However, from what I understand, just getting new content out there boosts your SEO, which means your potentially boosting your traffic.

A wondrous goal! Â What those who know these things recommend is a call to action at some point during the blog. Â Perhaps you have seen blogs that have a call to action at the beginning, middle, and end, or all three! Â Â I donâ€™t write my blog under the pretense of developing a relationship while scheming for you to buy things. Â Thatâ€™s just not me. Â I sincerely care about my audience and write from the heart. Â I do have two â€œcall to actionâ€ options on my website. Â The first is a monthly chance to win a silk scarf. Â The women send me their email and then at the end of the month I have my husband pick a name from a bowl. Â For example, one woman, Chali, was Aprilâ€™s winner and lives in Florida. Â She sent me a lovely note saying she has been going through a rough patch and winning the scarf brightened her mood. Â I love that! Â Another recent winner is from England, so thatâ€™s pretty cool! Â The other call to action I offer is a free downloadable coloring book. It has nice designs and positive quotes about creativity.

Blogging, with good content, helps establish you as an authority. Â

I had to laugh recently because I was doing a series of blogs on hysteria and the history of vibrators. Â Baby Boomer women talk about these things. Â So I was at North Folk Winery in Stark, MN, for Ladies Night Outâ€”itâ€™s a wonderful place to go if you havenâ€™t been there yetâ€”and this woman I barely know said, â€œI love Gailâ€™s blog! Â Itâ€™s always about sex.â€ Â No, itâ€™s not always about sex, but it made me happy that she was following me and thought I had interesting credible things to say.

The long-term gains surprised me a bit. Â

You know they say to be careful what you put out there because it will never go away. Â And to be honest, sometimes it feels like Iâ€™m in a vacuum. Â Iâ€™ll spend hours pulling together a blog, post it, and crickets chirp. Â Then, months later Iâ€™ll have someone comment on that blog. Â Maybe itâ€™s been pinging around the cloud like some mystical game of pong, and then landed on this personâ€™s computer. Â I donâ€™t know, but it seems to indeed be the case.

Time is a resource I take seriously. Â

My business is pretty much me. Â My husband, also affectionately called my minion, helps out a lot, but still. Â I was worried that if I started mucking around in every social platform out there I wouldnâ€™t have time for anything else. Â Right now, after I post the blogs on my website, I also send a blurb to my Facebook page, Google+, and Twitter. Â Iâ€™ve been told I should include Pinterest and Instagram, but I just need to draw the line. Â Maybe this is wrong, but for now it is what it is. Â That said, I know Iâ€™ve gained followers by posting to other social media sites. Â As much as I donâ€™t like it, the reality is I need to be where my target audience hangs out. Â From what I can tell, a lot of Baby Boomer women are on Facebook. Â I would encourage you to find out where your audience goes and make sure you are there too.

Okay, so hereâ€™s the confusion part:

As you know, when Facebook started it was for college students and high school students. Â Now Iâ€™ve heard itâ€™s mostly middle-aged folks who use it. Â Technology changes quickly. Â When I started blogging WordPress was the best platform, and the one I still use. Â Now there are others out there that might be a better fit for your business. Â My point is that things evolve quickly and itâ€™s worth keeping up if you want to be where your audience is.

Jon Morrow, a blogging god I follow, says you should put a minimum of ten hours into a blog, and that it should not be shorter that 1,000 to 1,200 words of good content. Â The Aging But Dangerous blogs Iâ€™m doing are to be 500 words. Â So, again, what resonates with your core audience? Â Long in-depth blogs or short nibbles? Â Whatever it is do more of that!

In the last month Iâ€™ve had at least three people I respect tell me I need to start adding video to my blogging. Â Iâ€™m an introvert and really have no need to see me up on the screen. Â However, it might be a nice vehicle to display my photos for the Old Hwy 61 Coalition, so maybe. Â But, as a writer, I love words.

It has been said you should always include photos with your blog. Â I naturally love doing that because Iâ€™m a photographer. Â If you arenâ€™t, I realize this gets a bit trickier. Just be sure to give credit where credit is due should you borrow from the internet.

I hope this helps if you are thinking about starting a blog of your own. Just be youâ€¦thatâ€™s who people want to get to know.