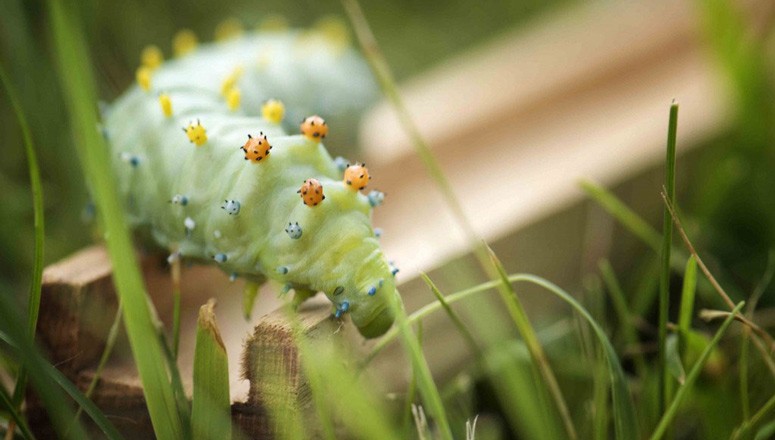 You are here: Home / The Best Part Of My Day / When Will I Find My Wings?

â€œWhen a caterpillar bursts from its cocoon and discovers it has wings, it does not sit idly, hoping to one day turn back. It flies.â€

Kitty litter buckets make iffy watering pails. Sure, theyâ€™re big enough and sturdy enough, but the handles are floppy and nine times out of ten I end up spilling waterâ€”cold from the hose water– on my feet instead of on the intended plant. I hate that.

My soaked flip-flops sounded like asthmatic sponges as I rounded the corner of our workshop, and such was my vexation that I nearly stepped on a slow moving caterpillar. It was a caterpillar, right? I had to come back because Iâ€™d never seen one like it before.

First of all it was about four inches long and rather chubby. Cute chubby. Secondly, along its outer canvas of lime green were little brightly colored nubbinsâ€¦red, blue, and yellow. It made me smile for no reason other than it seemed like something Hollywood would create for a childrenâ€™s movie.

I decided I had to show my husband, so I gently scooped the big boyâ€”or girl?â€”onto a scrap of lumber and headed across the lawn. The caterpillar seemed confused as to why it was flying ahead of schedule. Wasnâ€™t it supposed to form a pupa before becoming a butterfly or moth? What the?

â€œLook,â€ I said to my sweaty husband. Heâ€™d been wrestling with a pile of brush and the brush was winning. I showed him the caterpillar.

â€œThatâ€™s a monarch caterpillar. Iâ€™m sure of it,â€ he said.

â€œReally?” Â I looked at it as if it came with some sort of label. â€œI didnâ€™t think they were this big or this vividly colored.â€

He stared at it some more. Â He was an Eagle Scout after all. Â â€œIâ€™m sure itâ€™s a monarch.â€ Then, while squinting, â€œNoooooo. Itâ€™s probably not a monarch. Â Letâ€™s Google it.â€

It turns out it is a cecropia moth, and because they live only briefly, they spend most of their lives as caterpillars that can become large. That also explains why it seemed to be irritated with us when we tried to put it on a milkweed plant. Cecropia moths prefer silver maple leaves, monarchs like milkweed and cookies*. Who knew?

I put the cecropia caterpillar back where I found it, and wished it well. Like me it will find its wings eventually. I watched it slowly inch away to find its destiny.

Just imagining the wonders of flight, for both of us, was the best part of my day.

* I may have made the part about cookies up. Itâ€™s probably cake.