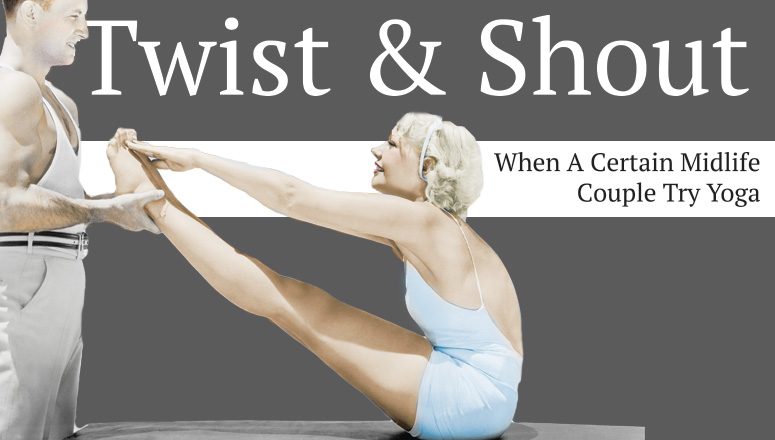 You are here: Home / Musings About Aging / Twist and Shout: When A Certain Midlife Couple Try Yoga

Date nights are supposed to be exciting.Â  They are intended to fan the glowing embers of daily life into an inferno of bodice-ripping passion.Â  Body parts ignored after familiarity sets in andÂ get reintroduced in clever new waysâ€¦at least for an evening.Â  Yep. Thatâ€™s what is supposed to happen.Â  But then there was our midlife date night.

My husband, bless him, decided we should try something new, something physical, something that might create the opportunity for a boob to pop out unexpectedly.Â  (Mine, not his.)Â  And with that in mind, he scheduled us for a coupleâ€™s yoga class.

We didnâ€™t want anyone to recognize us, so he picked a trendy, yuppie-infused, yoga studio in St. Louis Park, MN.Â  Somehow he forgot we own creaky bones, a lack of flexibility, and decidedly un-hip workout clothes.

My outfit of choice? A t-shirt large enough to cover an SUV in the winter and a full-figured womanâ€™s body at a yoga studio. Wanting to be Zen I chose one that said, â€œDoes my aura make me look fat?â€ Ahhhhh… acres of jiggling, sweat absorbing, cotton comfort! Thank you, Le-Fruit of the Loom!

We arrived late. There was a miscommunication about the location, which gave my husband reason to pretend he was a racecar driver. It took awhile to find a parking spot, but eventually, one appeared seemingly a mile away. We debated taking a taxi from the parking spot to the studio, but nah, walking meant quality couple time. As I crossed the street towards the yoga studio I failed to see the mini-Grand Canyon-esque pothole. I went down pretty hard, skinned my knees, and dirtied my tee shirt/toga.

A perky attendant greeted us with a smile followed by a lingering up and down glance. She informed us that the yoga session had just started, so, change our clothes and go on in. Uh, change? Donâ€™t think so. What you see is what you get, blood and all. Besides, my voluminous T-shirt would have required more than one locker space, and that would be rude. I may lack style, but I am not rude.

We tried to creep quietly into the yoga room. Â â€œTriedâ€ is the operative word.Â  It was as though we came through the room playing bagpipes, and playing them badly, no less.Â  A sea of young bendable couples turned and stared at AARPâ€™s finest. Â Thus acknowledged, we slunk over to a nice corner and threw our yoga mats upon the gleaming floor. Lord knows bending to roll them out quietly would be too taxing. We looked at the instructor to see what would come next.Â  We had fear in our eyes.

Tanya, the eveningâ€™s yogi, encouraged couples to volunteer, as she needed to demonstrate movements. Riiiight. Volunteer to be a Gumby couple? Â Nowhere in the flyer did it say that participants were expected to have the elastic bodies of young Chinese acrobats. Â Nowhere. Â Yet couple after couple began contorting into geometric shapes that defied names, let alone human form. Â We watched, gulped, and pretended to remember it was date night. This was fun!

We gazed lovingly into each otherâ€™s eyes, held hands, and attempted to do an airplane move. Somehow my hipbones did not adhere to my husbandâ€™s up thrust feet.Â  Doing his best wood-tick-on-its-back imitation, he flailed about has I tried to soar into the air via the hip/foot support system. My body went sort of up, sort of up, then definitely down, definitely down. Fortunately, there was no little black box in the ensuing plane crash, because there are the seven words our culture frowns upon.

Despite the wreckage, we gamely moved on with the program. We twisted into a human â€œMâ€, tried a warriorâ€™s pose that more closely resembled a rheumatic dry-hump, and somehow managed to make the tree pose look like it had a Dutch Elm infestation.

At the end of the evening, we were bribed with a chocolate truffle.Â  Wiping away the sweat, er, physical glow, my husband produced his biggest, bestest, grin. â€œGail, we have got to do this again! It was so much fun!â€

The next day, as even the tiniest movement created spasms of pain in muscles protesting the asanaâ€™s from hell, my husband still insisted coupleâ€™s yoga was a wonderful date-night. I tried to nod, but it hurt too much. I settled for whispering, â€œLub ew â€¦â€ but then stopped because my lips hurt.

Too much swearing does that.