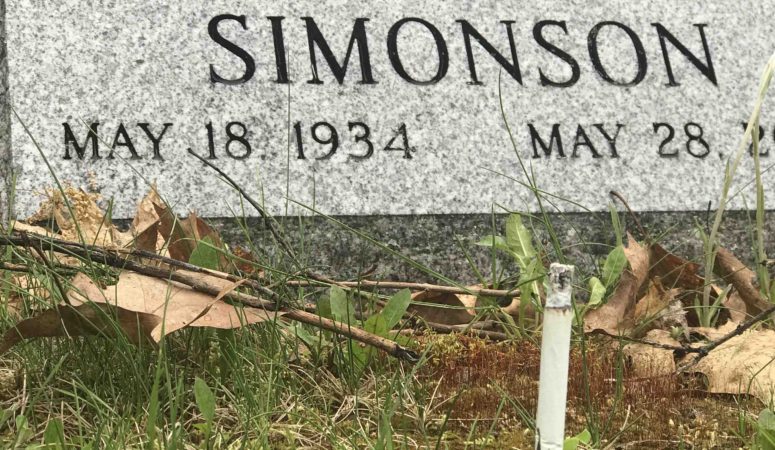 You are here: Home / Musings About Aging / The Last Cigarette, Ten Years After Mom’s Death 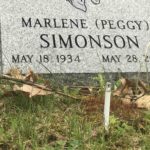 “I am committing suicide by cigarette,” I replied. She thought that was reasonably funny. I didn’t. I thought it was hideous that I should scorn life that much, sucking away on cancer sticks.”
― Kurt Vonnegut

My husband and I pulled into the cemetery, hoping the thick gray clouds would hold off the rain awhile longer. My brother and sister-in-law were already there, near Mom’s grave, looking skyward.  Following hugs and hello’s, as if scheduled, we each opened an umbrella as cold rain spat from the sky.

“Mom would do this to us,” I said, hunching to stay close to my husband’s warm body.

“She probably isn’t happy about this being the last ciggie,” my brother replied. “But at least she has finally realized it might be bad for her health and is quitting.”

We glanced at her grave and laughed at the irony.

A short while later my sister and her boyfriend arrived, followed by a niece and two of her young children. It was to be a celebration, this last cigarette, an era ending, a family gathered.

Here’s a little of the backstory…

Ten years ago, after Mom passed, her significant other was loathe to let my siblings and me have Mom’s stuff. He felt her possessions, what little there were, were now his. Nonetheless, during a post-burial visit, my sister snuck a pack of cigarettes from Mom’s purse when the significant other was out of the room. There were ten cigarettes slumped in the pack. An odd inheritance, cigarettes, and yet one that perfectly befitted Mom.

In fact, up until cancer took her, Mom fiercely insisted cigarettes were keeping her alive. She had gotten “hooked” as a young teen, and puffed like a dragon the rest of her life–albeit one cut short by lifestyle choices.

Ten cigarettes. And thus became “the” tradition. Available family would meet at Mom’s grave in May–the month of her birthday and her death–and place one of those remaining cigarettes–lit– near the headstone. 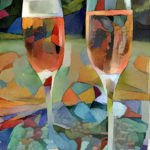 Along with the cigarettes, my sister would bring champagne, I would bring appetizers, and we’d stand around sharing Mom stories.  Some were funny, some were sad, some were baffling.

For instance, this year my niece said, “I remember visiting Grandma when I was six years old. She told me if I smoked a cigarette she’d give me a piece of Juicy Fruit gum.”

“She did what?” I said, wondering if my children had gotten similar offers when they visited Mom back in the day. That whole, “What happens at Grandma’s stays at Grandma’s” concept was starting to worry me as artifacts spilled out.

“I never smoked another cigarette, said my niece, “so I guess it was a good thing.”

There are times, too many in fact, that I believe I never knew my mom at all.

“Meh, that was Mom,” said my brother. “Remember how she’d try to cram mashed potatoes and gravy down our newborn’s mouths?”

Yes. Yes, I did. She insisted it would help them sleep better. No amount of arguing that breastmilk had all the babies needed would sway her. (Although, now that I think about it, mashed potatoes and gravy are still one of my favorite comfort foods…hmmm…)

The cigarette burned out quickly, even though the headstone acted as a shield from the wind. Mom must have needed to inhale deeply. I could see her grey eyes closed in contentment.

We stood around a while longer, taking in the quiet of the cemetery. Trilliums bloomed near the woodline, and my niece’s toddlers played in the grass and blew dandelion fluff into the future. 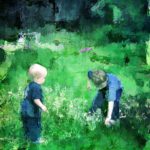 Sending seeds into the future

I’m not sure what happens next year. I suspect we will continue to gather, drink champagne, and tell Mom stories.

Like those last ten cigarettes, her memory burns bright. 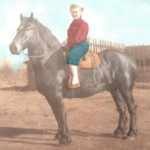