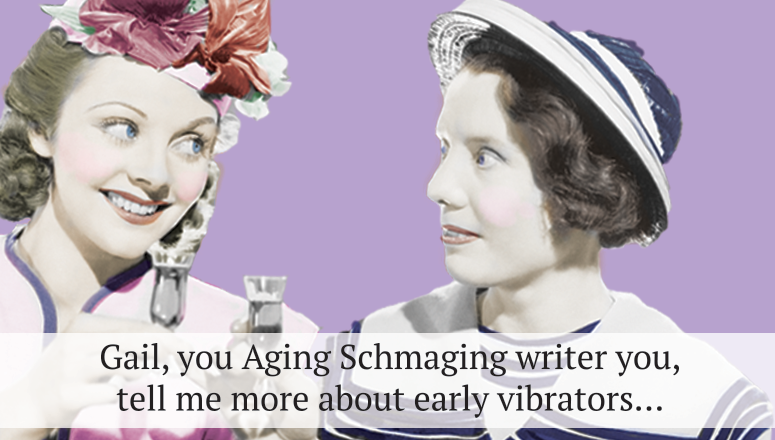 You are here: Home / Midlife Sex / Gail, You Aging Schmaging Writer You, Tell Me More About Early Vibratorsâ€¦

Of late, when I hang out with women, the topic of my blogs comes up. Particularly the blogs on hysteria and vibrators. The women snicker, elbow jab each other, and give knowing looks. But there are also questions. Lots of questions. So I thought I would include a little more information straight from Rachel Maines, author of The Technology of Orgasms.

The following is an online transcript of Rachel Maines describing â€œThe Manipulatorâ€ and a bit of the development of home-use vibrators.

The doctors didn’t like this thing because, of course, it was what they, what we historians of technology call a centralized technology, you have to bring the patient to the technology, you can’t take the technology to the patient. And of course, the other thing doctors didn’t like about it was having to shovel coal into it. You know, because that’s what, you know, it wasn’t in the same room with the patient, you know how in pictures of 19th-century factories, you see all these drive trains that are leather straps? Well, that’s how the power was transferred, there was a steam engine in one room with a drive train, and in the next room, at the other end of the drive train, was this table with a vibrating sphere in the middle of it that you would lay the patient across and that was the, so that was the immediate predecessor technology.

Things about like this, it’s wrapped, it’s got a leather covering around it, and it’s got these vibratodes with little ivory, little ivory tips on them. The vibratodes are what we would now call the attachments. My husband thinks that vibratodes is a really great word and he’s trying to get it back into the language, you know, like maybe as a name of a rock group, you know, â€œCrazy Eddie and the Vibratodes.â€ But anyway, it had attachments, even as early as the very first model. And it was manufactured by a perfectly respectable British instrument maker, which is still in business, Weiss, but they didn’t stay in the vibrator business very long after things started to look a little shaky.

At the turn of the century, they had the vibrator kind of split into two product lines. One was for doctors and one was for consumers and doctors really hated the idea that there were consumer vibrators out there. But you know, when the market speaks, you know, everybody listens, including doctors, they better. There were these relatively inexpensive, some that looked like an egg beater for people who didn’t have electricity. And it sounded like one, too, “Drrrr, drrrr,” and there were battery powered ones, there were even water-powered ones that you could attach to your sink, this was before water was metered. So it’s like basically little tiny turbines, about this big and they apparently worked, I’ve never seen one, a real one, but I’ve seen ads.

And then the ones that everybody thinks are the funniest, which are the doctor’s models. Because they look like, there’s one that I have a picture of that looks like a cross between a visitor from outer space and an old-fashioned telephone, and it’s got this dial with little mother of pearl buttons that don’t have anything on them at all. So it’s just like fast, faster, fastest. But you got to look scientific, so you have the little mother of pearl buttons, right? Brrrroooommmm, you know, the patient will be so impressed, and these were quite expensive. The model that everybody seems to like the best, the Chattanooga, which had to be shipped by freight because it was so heavy, it stood about 5 feet tall and in fact, it’s in the Vibrator play, they **** from Sarah Wolfe’s play. They’ve made a rooftop Chattanooga and it rolls on wheels and it had to have a huge counterweight, about this big, because, with the vibratode attached to the vibrating head at about the five foot level, if you roll it up to the, roll it around, it would’ve fallen over if it didn’t have this counterweight. Because people always ask why is there this box on the bottom and that stuff, itâ€™s because it’s so, it looked so top heavy it would fall over. And that one cost $100 at a time when you could buy a small house for $200. So these are very expensive machines and of course, in the 1920’s, they all just disappeared because doctors didn’t want to have anything more to do with vibrators.