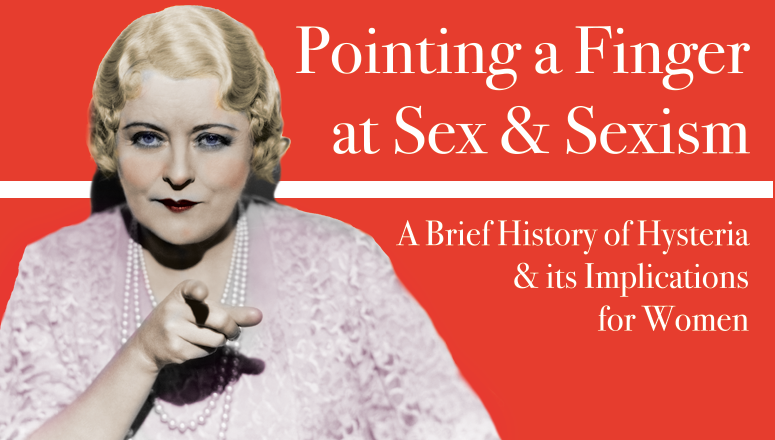 You are here: Home / Midlife Sex / Pointing A Finger At Sex And Sexism

A Brief History of Hysteria and its Implications for Women

â€œWhen these symptoms indicate, we think it is necessary to ask a midwife to assist, so that she can massage the genitalia with one finger inside, using oil of lilies, musk root, crocus, or something similar. And in this way, the afflicted woman can be aroused to the paroxysm. This kind of stimulation with the finger is recommended by Galen and Avicenna, among others, most especially for widows, those who live chaste lives, and female religious, as Gradus Farrari da Gradi proposes; it is less often recommended for very young women, public women, or married women, for whom it is a better remedy to engage in intercourse with their spouses.â€

â€œIs it okay if I masturbate by rubbing my thighs together?â€Â  That was a question discreetly asked via notepaper during my recent adventure at the Smitten Kitten sex toy store in Minneapolis.Â  The open and honest discussion among the midlife (and beyond) aged women in attendance got me thinking about the weird fear of womenâ€™s sexuality.Â  I chose the word â€œfearâ€ very intentionally.Â  Somewhere, somehow, it was deemed appropriate for women to have sex under the proper circumstancesâ€”married, innocent, initiated by the manâ€”but heaven forbid we enjoy ourselves lest the word slut come into play.Â  I thought it would be fun to take a look at an example of womenâ€™s sexual repressionâ€¦a disease known as â€œhysteria.â€”Good sex is like good bridge. If you don’t have a good partner,

“Good sex is like good bridge. If you don’t have a good partner, you’d better have a good hand.”

Hysteria, or â€œwomb disease,â€ was described as early as 2000 B.C according to historian Rachel Maines.Â  Up until 1952, when the American Psychiatric Association removed it from their list of diseases, hysteriaâ€™s symptoms were as varied as the patients themselves.Â  Depending on the era, the causes of hysteria were assigned to vague and general descriptions of the female constitution.

For instance, in Platoâ€™s time hysteria was believed to occur due to an â€œinflamed and disconnected uterus which was suffocating or choking the patient.â€Â  Other theories included the failure of the uterus to expend its seed, sexual lack, or, in Freudian fashion, frigidity despite the supposed pleasures of penile to vaginal penetration (Maines p.8, 9). 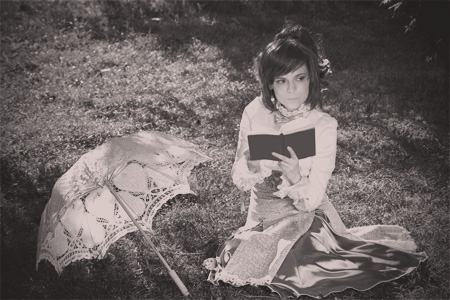 Throughout the centuries, hysteria became a convenient diagnosis for a myriad of inconvenient behaviors.Â  Physicians concluded such varied female symptoms as yawning, too much bicycling or horseback riding, or a tendency to be disagreeable with a husband were manifestations of hysteria.Â  My personal favorite symptom was â€œreading French novels while wearing tight corsetsâ€ (Slick & Omori, 2008).

“No woman gets an orgasm from shining the kitchen floor.”

Lacking a consensus on hysteriaâ€™s cause or symptoms; the medical profession refrained from clearly stating successful treatment equaled female orgasm. Instead, they provided patriarchal-soothing medical descriptions like â€œreaching the paroxysm,â€ or â€œexito-motor paroxysmic accidents accompanied by convulsions and crises of inhibition with loss of consciousness, lethargy, or catalepsyâ€ (Maines, p.23). Given all the confusion and limited attention to female orgasm, it comes as little surprise that â€œnormalâ€ female sexuality was defined by men. 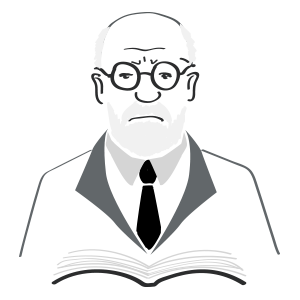 Supported by Freudian influence bona fide sex meant sexual penetration of the vagina by the penis resulting in male orgasm. If a woman failed to achieve orgasm in this way (and upwards of 70 percent of women do not per Alfred Kinseyâ€™s and Shere Hitesâ€™ research), she was considered unhealthy, frigid, or sexually dysfunctional. Also, women were indoctrinated to believe that female masturbation was harmful, impure, and a shameful violation of religious and cultural norms. As a result, medical treatment for hysteria became an accepted method of assuring men they were not the problem of womenâ€™s dissatisfactions while simultaneously introducing womenâ€™s sexuality as a disease paradigm.