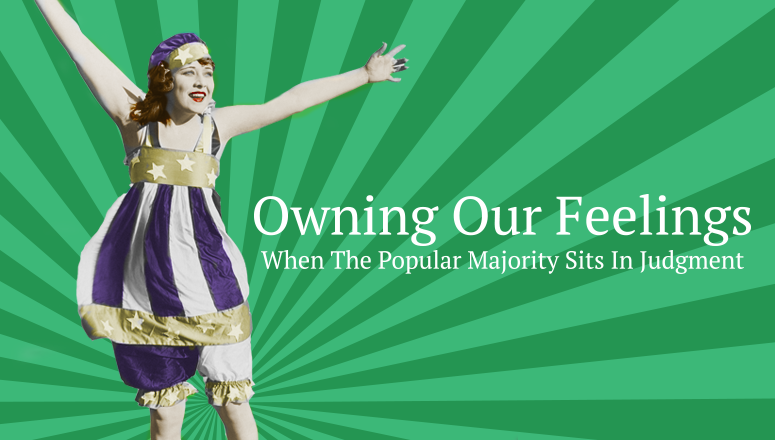 You are here: Home / Musings About Aging / Owning Our Feelings When The Popular Majority Sits In Judgment

“All of us sport an invisible sign around our necks — “AS IS.” It means, take me as I am. I may not become what you want me to be. And I’m far, far from perfect. But I have some great qualities, too, as well as my share of faults. You will have to take me “AS IS” and I’ll take you that way, too.”

Am I a chameleon?  All through my life I have been an introvert, and therefore a woman with a tendency to be quiet as others emote, share, and set the stage.  Listening to people is a comfortable place and a secretive womb where I am nobody, and I am everybody.

Hearing about other people’s choices and opinions is endlessly interesting to me.  I listen without comment because I am processing the information. My silence seems to imply that I agree with the speaker, or speakers, but implications without certainty create suspicion. People are uncomfortable with those who aren’t like them.

Brene Brown says, “When we let go of what other people think and own our story, we gain access to our worthiness—the feeling that we are enough just as we are and that we are worthy of love and belonging.”  I adore Brene, but owning my worth “as is” remains a struggle as I explore midlife.

For instance, my sister recently invited me to join her at a small family gathering.  At first I was pleased that, for the first time in… forever…I was to be included in this female group.  As a child I desperately wanted to be accepted by two of the people in attendance, but for unknown reasons never made the cut.  I allowed myself to be used and, at times, manipulated in my hunger to be inside instead of outside.

It wasn’t until I grew up and into myself that I eventually realized I was happier not being held to their standards. What had I been thinking?  I was me—perfectly imperfect—even if that was, and is, distasteful for two of my family members.

Slowly letting go of feeling “less than,” of not getting approval or invitations, made me clearer about who I am, and who I am not.

I emailed my sister and told her my reasons for not going to the event. She told me she understood the age-old scars I carried. She told me that she would not judge me.  She told me I needed to know, however, that her relationship with the women was different.  She was, and had always been, “in.”  She believed they were wonderful, caring, women. And with that I once again felt the intangible measuring stick.  Them.  Me.  I was on the outside.

As the week progressed I found myself shedding tears at odd times.  Old memories of being “the other” played through my mind despite believing those moments were long dead and gone. My dreams became laced with rejection and abandonment.  I just wanted the resurrection of young Gail to go away.

Last night my sister emailed a photo of her and those two women smiling into a selfie.  No words, just the photo.  Why? The unity was like a cyber knife.

I hit the delete button.

Brene Brown says I should let go of who I think I am supposed to be and embrace who I am.  Nice words, hard to do.