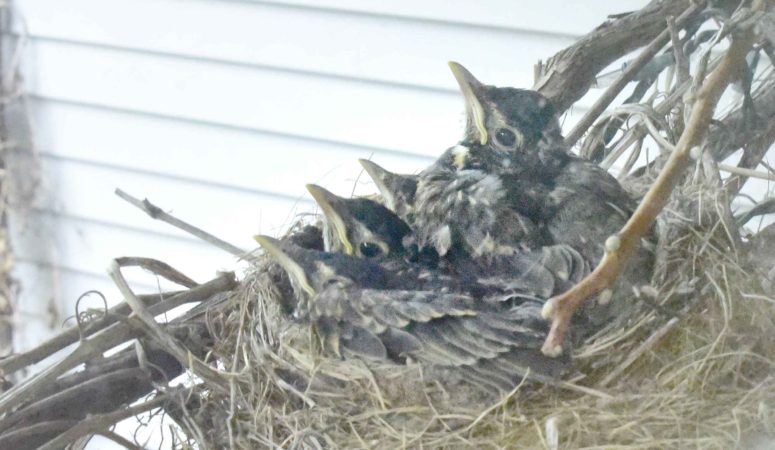 You are here: Home / Musings About Aging / And Then There Were None: How A Robin Family Made Me Appreciate An Empty Nest 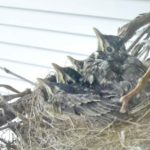 “Your child’s life will be filled with fresh experiences.
It’s good if yours is as well.”
—Dr. Margaret Rutherford
My husband, rather new to texting, sometimes sends strange messages. There was the time he tried to tell his son–via text messaging– that we would soon be arriving at his home. The text, however, came out something akin to “We will soon be driving moose in Aspen.” His son sent a lovely reply mostly wishing him luck with that.
Therefore, it was with pleasure that I began receiving my husband’s texts about the robin babies living above our front door.
“Were done to to,” came the first text.
“Hey,” I said to my daughter as we walked along a wooded path, “There are only two robin babies still in the nest. From four to two… I hope they were ready.” 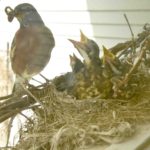 From eggs to flight…13 days

My daughter smiled at the information but said nothing as we continued on our way. We were on our annual “chick weekend,” and I had gotten us slightly lost. Our destination was to be Wolf Creek Falls in Banning State Park, but I guess I should’ve taken a left at Albuquerque.* At any rate, we were on an adventure somewhere near the falls, and the views were lovely.
“It’s freaky how fast those babies grew,” I continued. “I can’t believe they are leaving the nest already. It seemed like a week ago they barely had feathers, let alone functioning wings.”
My daughter held my camera for me as I scrabbled over a couple of large trees that had fallen on the trail. “Sorry I missed the right pathway…” I said.
“Nah,” she said, “this is great. We’ll find the falls.”
My phone pinged with a text a short while later.
“OMG! Hairs 1 left.”
A few moments ticked away, and another ping. “Baby scared. Won’t leaf. Mom trying to encage.”
I updated my daughter. “Funny how that works. Mom robin is trying her best to lure the last baby from the nest with worms and encouragement, but the baby isn’t convinced it can fly.”
Ping! “Baby out of next. Sitting on ledge. Mom near.”
My daughter and I still had not reached the falls. The trail sometimes hit a dead end, but no matter. We adjusted the route while chatting about where our lives were at, and where we wanted them to go. I told her how proud I was of her accomplishments, and she said she wished she had more of my creative nature. (She probably secretly wished I had a compass too.)
Ping! “Mom gutting nowhere. Baby still want try. Sitting in a pile of shit.”
I laughed. Fear is a powerful thing. Many of us have probably sat in our own piles of…stuff… until it became too unpleasant to stay. Some of us probably learned to accept the piles as safer than trying those darn wings. Some of us probably fear  change most of all.
Ping. “Its gong! Its gong! Mom seems happy. She his free to!”
“The last baby has left the nest,” I said as the trail ended at Wolf Creek Falls.
My daughter watched as the river found its way over rocks, around downed trees, and past grassy clumps. No worries. No barriers. No end in sight. Nature doing its thing. 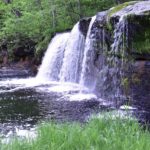 “It’s beautiful,” she said.
I’ve been an empty nester for many years. Observing the robin care for her eggs, and then the babies, and then the fledglings reminded me of how fast time goes. Baby robins fly about 13 days after they hatch. 13 days. A heartbeat. I could relate. Our chick weekend feels that way too.
“Ready to head back?” said my daughter.
She had learned to trust her wings long ago. In a matter of hours, she would be back with her husband, her career, her grown-up world, and I would return to mine.
It is right that she no longer needs me. I know I did my best to raise her to be this strong, this independent, this extraordinary.  And as often as I screwed motherhood up, my son and daughter still turned out way better than I could have imagined. My empty nest is a badge of sorts. A bright, shiny, good badge.
The sun was dipping a bit as my daughter took the lead back to the car. Her path was more direct. It turns out my map-reading mistake helped her navigate the turns and twists with confidence.
Huh.
*(Too many Bugs Bunny cartoons in my youth.)