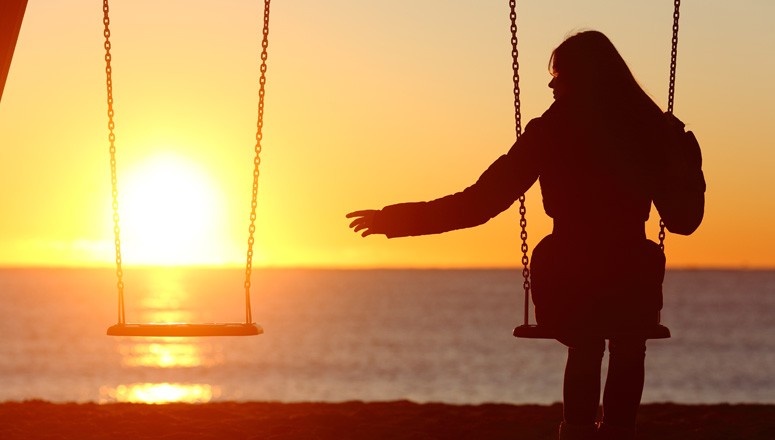 You are here: Home / Menopause / Moon Pause, Part 8: Grief And The Aging Woman

â€œA young man saw an elderly couple sitting down to lunch at McDonald’s. He noticed that they had ordered one meal, and an extra drink cup. As he watched, the gentleman carefully divided the hamburger in half, then counted out the fries, one for him, one for her, until each had half of them. Then he poured half of the soft drink into the extra cup and set that in front of his wife. The old man then began to eat, and his wife sat watching, with her hands folded in her lap. The young man decided to ask if they would allow him to purchase another meal for them so that they didn’t have to split theirs. Â The old gentleman said, “Oh, no. We’ve been married 50 years, and everything has always been and will always be shared 50/50.” Â The young man then asked the wife if she was going to eat, and she replied, “Not yet. It’s his turn with the teeth.”

The Challenges Of Widowhood

When I met with my friend Judy to talk about the challenges of widowhood, I was given a privileged snapshot into the gradations of grief. Throughout our conversation, Judy would burst into tears over happy memories, sad memories, and a myriad of issues associated with being a new widow.

Her marriage was not storybook, yet in death Cy, her husband, has become more lovingâ€¦ more talentedâ€¦more selfishâ€¦ moreâ€¦ everythingâ€¦in her mind. Â I wonder if her anger towards him both while he was living, and now that he has left her to face the future alone, fuels her mixed emotions.

Judy is lucky, however. Â Cy left her with a pension, savings, assets, and medical coverage. Â By contrast, many aging widows spiral into poverty rather quickly. Almost four times the number of elderly widows lives in a state of poverty versus their married peers, and only eighteen percent have pensions. (Hillier) Already thrust into an emotional quagmire of grief, the dwindling finances of widows quicken the descent into despair.

After the death of a loved one, shock and numbness soon follow. This can be a blessing because it allows the rudiments of functioning before dealing with raw emotions. Some women abort the grieving process to show a brave face to the world, but this often manifests in illness or behaviors unusual for the person. Â Some dwell on the past and have emotional eruptions consisting of anger, guilt, depression, and over-compensating (drinking, eating, spending, gambling, for examples) to feel something, anything. Â And, when it seems like nothing worse can happen, family members get greedy.

Judy’s best friend, Bonnie, recently lost her husband as well. His cancer prognosis was grim, and he did not want Bonnie to deal with the expense and endless caregiving his condition required. One evening, after she left for work, he put a gun to his head and ended it. Â Mixed within Bonnie’s grief was a lot of anger. She felt suicide was a selfish act, and left her completely unprepared for the aftermath. Â Bonnie, in various stages of sorrow, had to make choices to survive. There were funeral expenses, medical bills, and everyday household costs. Â She began to sell off items no longer neededâ€”a boat, for instanceâ€”in order to meet the obligations.

Her children responded in rage. Â They believed she was selling items duly â€œowedâ€ to them as a form of inheritance. Â To stop her, they contacted the police and suggested an investigation. Â Had their mother perhaps murdered their father and made it look like suicide? Â It was a nightmare. Â Bonnie had a stroke shortly after. Â She is still recovering and estranged from her children. Some days are good, and others are a struggle. Judy often visits and attempts to keep Bonnie’s spirits up, which in turn helps Judy as well. Companionship and loss often are bittersweet partners.

My grandmother, as she approached the age of 102, told me one of the disadvantages of a long life was the loss of so many loved ones. Her parents, her siblings, even her children were passing on before her, and she felt alone. Â There were still many family members and friends to socialize with, however, the mounting losses took a toll on her happiness.

It has been suggested that those with larger social circles and strong religious or spiritual backgrounds face death better. Â Nonetheless, I have not necessarily observed this to be true. I would say my grandmother fit the description of a person with healthy social ties and a vibrant religious belief system, yet she succumbed to depression with each loss. In fact, when my uncle died she had a mental breakdown that took almost a year to work through.

The authors of Stages of Senior Care (Hogan, 2009) offer this checklist onÂ “Normal” grieving, which includes:

Symptoms of concern with grieving Â include:

According to Doress-Worters and Laskin Siegal, some of the things we can do to help those confronting bereavement are:

Grief is a personal journey, and there are no set time limits on getting through it. As my grandmother stated, the older one gets, the more death one will confront. Aging women will continue to be the caregivers, the tenders of loss, and the heart that breaks for those who go on ahead.

GriefNet: An online community of people dealing with grief, death, and other major losses. It has 37 email support groups and two web sites. A companion site, KIDSAID, provides a safe environment for children and their parents to find information and ask questions.

National Mental Health Association: Â A large organization with 340 state affiliates which work to improve mental health policy and the lives of people with mental illness; has referrals for counseling and support programs.

The Compassionate Friends: Â National self-help support organization for families grieving the death of a child. Provides information to help others be supportive.

Widow.comâ€“Â Widow.com is dedicated to bringing widows and widowers and those who stand ready to help them to one place- a community of understanding and caring.