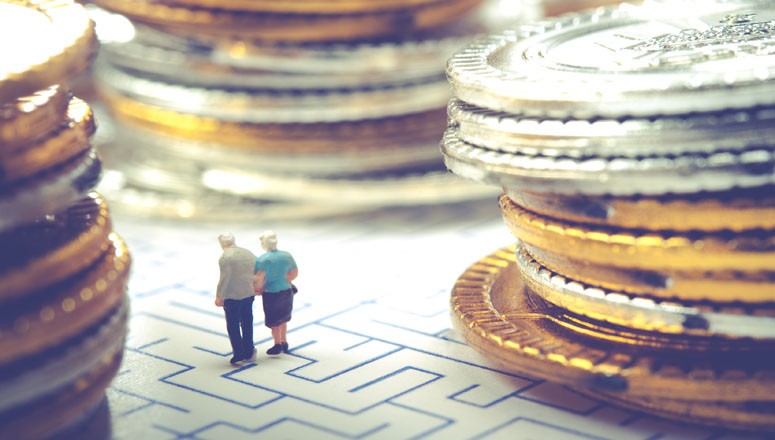 “Inside every older person is a younger person â€“Â wondering what the hell happened.”

I grew up in a family that never saved. Part of the issue was the differing values placed on money by my parents. My dad liked to buy things with the belief they would be a sound investmentâ€¦land, tractors, tools. My mother would save for short-term goals like a new garden tiller, or a new saddle. Unfortunately, Dad would take, without asking, the money Mom was saving to buy his “investments,” and Mom would get even by spending money we didn’t have. Â It is my belief they thought Social Security, and the land they owned, would equate to enough retirement income to be comfortable.

When Mom and Dad divorced after thirty years of marriage, Dad bought out Mom’s share of the farm with borrowed money. Mom proceeded to spend her windfall rather quickly and had nothing but Social Security and the generosity of her significant other to live on in her later years. She never complained, but I know it dampened her independent spirit and sense of pride.

According to a 2000 study by AARP, 1/6 of the population over the age of 65 earned less than $15,000 a year, and 40% received more than $37,000. It was felt this was comparable to all adult households in America. (Hillier) Social Security, initially designed to care for dependent children who had lost a father, unemployment insurance, and old-age assistance (Title I and Title II) (“Historical Background and Development of Social Security”), found greater coverage for the aged in revisions made in the 1960’s and 1970’s. Nonetheless, most elderly Americans living on Social Security live very modestly.

Women face a greater likelihood of poverty in old age for a number of reasons including:

I recall a patient I used to care for in the dental office. She married a lawyer and was a stay at home mom to their one son. They traveled, ate well, and enjoyed her husband’s successes. When he died suddenly, she was left with a mortgage she couldn’t pay, medical expenses, and little financial savings. Because she hadn’t worked outside the home, she felt her age and lack of experience pre-empted employment opportunities. She took a job as a cashier at a grocery store, downsized her home, and lived a very austere life. Her son did not deal with the changes well and became estranged. She told me she wished they had planned more for their future, but like many people never believed she would find herself a widow in her 50’s.

“Many of us live below the poverty line but manage finances with a genius that would earn distinction in the boardrooms of the nation.”

What are some things women can do to prepare for the future? Margaret Cruikshank offers the following suggestions for policy change:

From a common practical approach, some suggestions offered by Dr. Pamela Blair include:

The research shows that 90% of the elderly poor are women, ethnic minorities, those living alone, and the oldest old. 90% !!!!! Â Many failed to plan believing Social Security and Medicare would provide most of what they would need in their later years. They paid into the system over a lifetime of work, hadn’t they? However, changing governmental policies, fewer workers paying into the programs, and a large population of aging adults makes the likelihood of financial security a slippery slope. For those able to plan and act now, choices are available. We must also act with our hearts, and reach out to our elders already living in poverty by supporting programs designed with their welfare and our morality in mind.

Programs That Can Offer Assistance

www.MinnesotaHelp.info
An agency that helps link people with services.