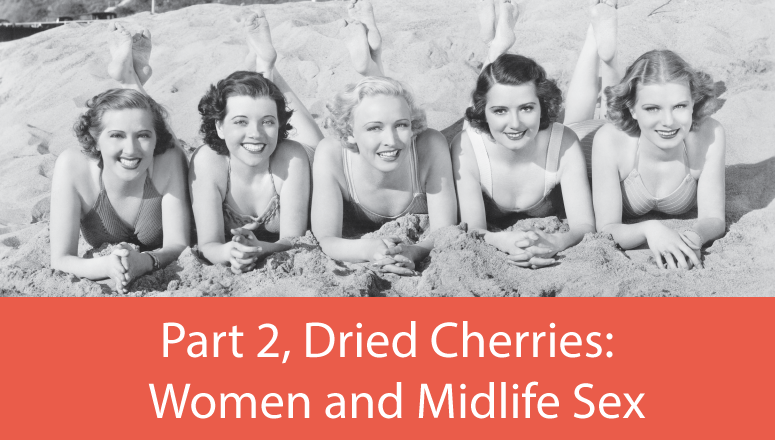 As a Baby Boomer woman with her landing gear in place to skid and bump onto the tarmac of the considered old, Iâ€™m fascinated how loneliness and sexual satisfaction mingle at this stage of life. Rachel Mainesâ€™ book, Technology of Orgasm, (Maines, 1999)Â gave me not only a historical view of technology as a sexual device, but on the culturally approved medicalization and judgment of women’s sexuality. Her writing and research were well developed in its focus. However, it made me realize I wanted to know a whole lot more about the role of vibrators, sexual satisfaction, and shame in post-menopausal womenâ€”a group scarcely addressed in the book.

I wrote the author to request resources more specific to my interest, and she was kind enough to suggest I spend time in library databases under â€œolder womenâ€ and â€œvibrators.â€ I also wrote to Dr. Betty Dobson. My email inbox is still smoking from her delightful directness. Here is but one of Bettyâ€™s statementsâ€”â€œSince I hit 80, Iâ€™m almost ready to retire from hot partner sex as long as I can blow it out my clit every now and again with my vibrator and a dirty fantasy.â€ Betty! Letâ€™s just say that if the FBI ever raids my computer files I want to be there to see their faces as they read the emails.

I heard about female hysteriaâ€”wink, winkâ€”long before I read Mainesâ€™ book, but had never put much thought into the social environment in which such a diagnosis flourished. Women were, and remain mysterious and scary creatures. We are either over-sexed nymphomaniac succubus whores in need of treatment, or we are frigid sexless drones in need of treatment. Somehow we never get it right in whatever cultural version of â€œrightâ€ is popular at the moment.

It is staggering to think how much profit has been made trying to fix women in the medical, pharmaceutical, and beauty industries. What confuses me is why womenâ€”of any maturityâ€”accept the â€œthou shalt notsâ€ imposed upon them. Why did women in the days of diagnosed hysteria go along with the idea that sexual dissatisfaction equaled sexual dysfunction on their part? Didnâ€™t Mr. â€œEight-second climaxâ€ Johnny have a role in it?

Most of the women Iâ€™ve known in my life are smart, resilient, and questioning. If traditional, social, religious, or moral constraints say they canâ€™t do something they are very good at nodding politely and doing it anywayâ€¦albeit discreetly. To a great extent, that is why I struggle to believe the male-directed edict that women shouldnâ€™t be too sexually interested was in any way followed. While I understand the centuries-old cultural climate is geared towards procreation and male pleasure, Iâ€™ve got to believe women throughout the ages found sexual outlets.

Didnâ€™t Great-Great-Great Grandma eye the cucumber ripening in the garden and wonder? How about the rocking chair smirk as she rhythmically darned her husbandâ€™s socks? (Hmmmâ€¦Is that why Mona Lisa is smiling the way she is?) Did bath time hold its joys when the slippery bar of lye soap sudsed up Grannyâ€™s nether-regions? My hunches and assertions aside, hysteria was diagnosed and treated. And treated. And treated. Women, carrying the weight of moral goodness, found a dignified way of hiding the shame of normal female sexual desire by seeking medical care. With medical consent, they also spared their husbandâ€™s fragile egos. In other words, hysteria was an acceptable loophole that benefitted women while perpetrating male ideals. It was a convenient system until technology changed the playing field.

From a religious standpoint, Eve’s little faux pas with the apple had a lot to do with the concept of women and weak self-control, and yet the Bible never specifically mentions women and masturbation. So why do people believe women’s self-pleasuring is a fire and brimstone- style sin? Why is sexual desire a sin at all if we are born sexual beings? I suspect it is about control, and while it is easy to say patriarchal entitlement is the be-all and end-all of control sponsorship, I will admit listening to my grandmother’s theories during my formative years offered a complex and bewildering education on what it means to be a woman.