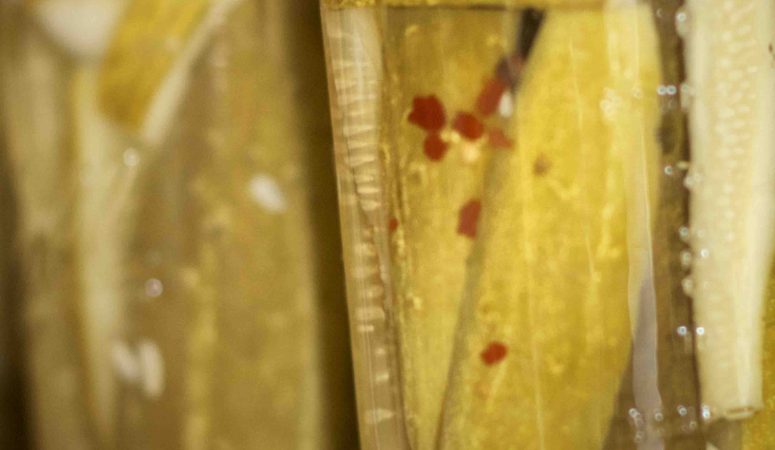 You are here: Home / Musings About Aging / A Midlife Woman’s Recipe For Determination:Where There’s A Dill, There’s A Way. 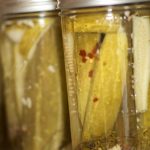 Beads of sweat formed on my brow. I was under extreme pressure and any former moments of glory faded like watercolors in the rain. (Thank you, Al Stewert, for that line.) Was I competing in an Olympic event? Um, no. Was I performing in front of millions? Nuh uh. Waaay more pressure than that.

So what? So what? I’ll tell you what. Pickles are a big deal in my family, and so far I’ve not reached pickle celebrity. I haven’t even been given a pickle participation award, and, as everybody knows, participation awards are given out for merely thinking about showing up.

My son-in-law, Nick, has a grandma who is a pickle making rock star. I’ve not been given Mary Ann’s secret recipe, but I have been lucky enough to consume the results. Her pickles are my watermark for what the ultimate pickle should be…crunchy, salty, garlicky, and just a wee touch sour. A pickle parade marching on my tongue. Through the years, however, my pickle making has produced ho-hum nibbles at best. No parade. No Santa Claus at the end.

This year, as a birthday gift, my daughter gave me a packet of cucumber seeds, a packet of dill seeds, and a waggle of the black briefcase chained to her wrist. “I have Mary Ann’s recipe,” she whispered. “Grow the stuff and we can make this happen.” Wink, wink. She’s the best daughter ever.

I planted the seeds. The dill took off immediately. It knew it had a job in the near future. The cukes, well, they meandered along. Tiny yellow blossoms erupted, but the more I watched the slower anything happened. Right before leaving for Ely for a few days in July I checked again and there were still no baby cucumbers on the vine. Whew. My timing was going to be good.

We returned to find giant yellow-bellied blimp cucumbers that were so fat and swollen all I could do was chuck them over the fence and hope I didn’t kill a squirrel if one landed badly. Obviously, the cukes were messing with me.

Over the next few days, I again watched for little cucumbers to form. Nada. Then, overnight, large ones magically appeared. I resigned myself to the fact that I would have to have pickle wedges instead of nummy baby dills. Curse you pickle gods! I am not your puppet! As I was fist-pumping the sky, the cucumbers got even bigger.

My daughter meant well when she gave me the seeds. And, not just the seed seeds, but the seeds of hope, and the seeds of mom and daughter time. How many of us make precious memories by stealing someone’s recipe and making bootlegged pickles. (Is that a Hallmark card yet?) Alas, my daughter is a crazy-busy woman. Every summer weekend was spoken for before April. There was no way she would be available at the same time the cucumbers were the proper size. But bless her for the idea of it.

Therefore, without THE recipe, I turned to the only other reliable source I know. Google. I found a recipe that seemed, perhaps, similar to Mary Ann’s, but who knows. After carefully studying the ingredients I did what I always do… ignored the recipe and punted.

Now I wait. The pickles look pretty in the jar, but the proof will be in the tasting. I’ll let you know in a few weeks if the parade has started or if I’ve dropped to me knees praying for a participation reward.

Believing in the pickle dream? The best part of my day.