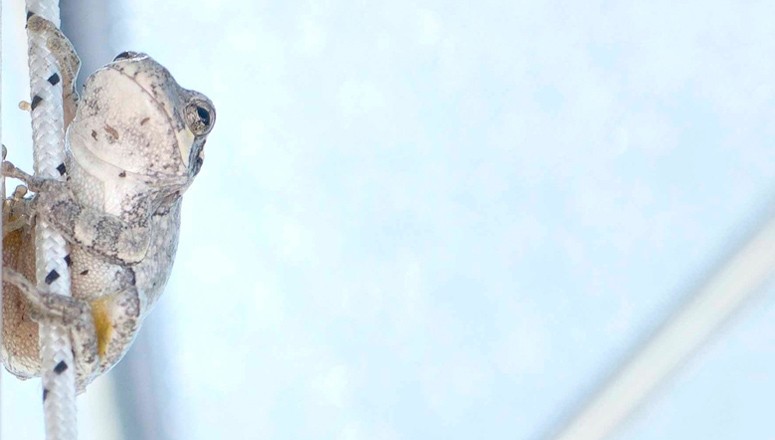 You are here: Home / The Best Part Of My Day / Midlife Peace In A Chaotic World

He wondered what kind of life it would be, having to keep swimming all the time to stay exactly in the same place. Pretty similar to his own, he decided.â€

The patio umbrella slowly creaked open inch by inch despite the gusto used while cranking the handle. Just as the canopy reached its widest possible opening I noticed a dark grey blob on one of the metal ribs.

â€œPlease, please, please donâ€™t let it be something that will fly at my faceâ€¦like a sleepy irritated bat,â€ I prayed. I tensed, totally forgoing faith in fervent, panic-style, supplications. And thenâ€”

With a newfound wave of bravery I tilted my head and looked a little closer. A peppy tree frog scooted his way towards the top of the umbrella. Apparently he was hoping I wouldnâ€™t fly at HIS face, so we were even in that arena. Iâ€™m not sure if he offered any prayers, but I promised I meant no harm. 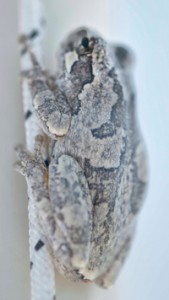 As the afternoon faded into dusk, the frog and I sat in comfortable companionship. I worked on my computer, soaking in the waning vestiges of summer, and he stayed on top of the umbrella watching. Those froggy black eyes, mysterious and calm, cheered me on.

Nearby our small pond and waterfall, alive with water-loving frogs, algae, and a few shy goldfish, uttered sounds akin to nature gargling with bourbon. It was a happy, rather tipsy, sound, and I drank it in. Â Maybe midlife brings that sort of perspective.

Some people think the life of a writer/artist is a lonely one. Pfffffft. I had plenty of company as I sat in peace, and it was the best part of my day.