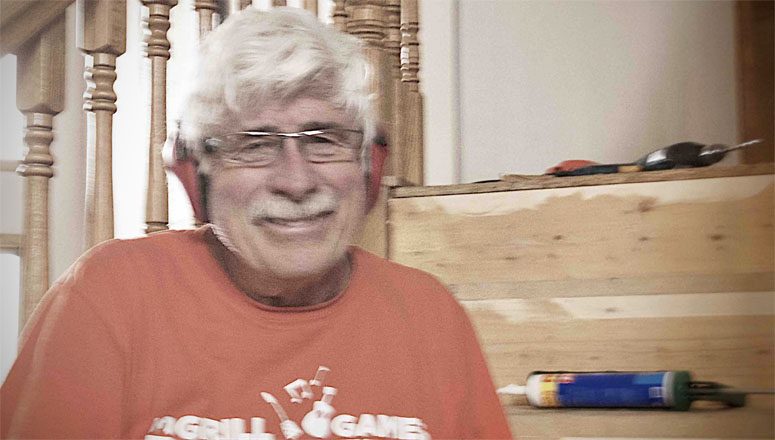 You are here: Home / Musings About Aging / Midlife Marriage: The Nine-Step DIY Project That Had More Than Its Ups And Downs

“They say marriages are made in heaven. But so is thunder and lightning.”

Ladies, back me up. Sometimes we need change for the sake of change, right? Iâ€™m referring to sprucing up our homes, and not necessarily our marriages or relationships, but there are times the two come crashing into each other.

My husband is a, shall we say, thrifty guy. Most of the time I love that about him, except when I donâ€™t. For years Iâ€™ve been suggesting we replace the old, wrinkled, stained upstairs carpet, and for an equal amount of years he has been saying, â€œNO!â€ and, â€œWhy?â€ In his world unless something poses a health risk or is undeniably falling apart it is just fine. Leave it alone.

Recently, for some reason known only to the stars and perhaps a mysterious mathematical equation, he agreed to the carpet replacement. Not wanting to do or say anything to make him change his mind, I kept very calm and detached towards the process as a whole and nearly silent to details in specific. All was going well until the topic of the stairs leading to the second floor came into play. Nine ugly steps equating to a veritable landmine of relationship diplomacy.

Him:Â Weâ€™re not doing anything with them are we?

Me: Oh, I thought someday, maybe, it would be nice to replace the carpet with oak tread and risers. But it doesnâ€™t have to be this year.

Him: Iâ€™ve never replaced stairs before.

Me: Thatâ€™s why Iâ€™m saying it doesnâ€™t have to be nowâ€¦even though it will look weird to have the hideous carpet on the stairs when we replace the upstairs carpet.

Him: Let me do a little research.

Me: Sure. If you want. Ripping out all the carpet at the same time makes good sense. (In my head Iâ€™m screaming, Stop talking! Stop talking before you look too eager.)

A few days later he waved me over to watch a YouTube video about replacing carpeting on stairs with wood treads and risers. The video said it was an easy DYI transition that would take maybe half a day, tops, even if you didnâ€™t own a hammer, nor had the brain power to spell the words, â€œstair steps.â€Â Â  We looked at each other. A half-day? Pffft. Weâ€™d be fools NOT to re-do the stairs.

My sweetie, being thrifty as previously noted, checked all the box stores in search of the best deal. He did NOT ask me to join him. Whenever I see something that is cute or inspires another design direction, more money gets spent. (He loves to tell the story of when we stopped at a tile store to buy 16 one-inch tiles for a mirror he was making, and we ended up redoing our half-bath because I was flooded with ideas. What?) After he had purchased unfinished treads and risers, the first project involved staining and varnishing the various pieces. We figured that didnâ€™t really count in the half-day timing as the YouTube video guy spoke about using pre-finished wood.

Rip out the old stair step carpeting. While my husband started with gusto, it became quickly apparent that the previous owners used a magnificent staple gun and unlimited industrial grade staples, or at least the carpet installers did. We ended up getting pry bars and grunting our way through the process stair by stair. Once off, the carpet looked like an angry metal porcupine. I reverse rolled the mess, so the staples were on the inside, and gingerly set it aside. We then tackled the padding. Like the carpet, it was generously stapled to the particleboard underlayment. The multi-colored foam came off easilyâ€¦ but the staples stayed put. My husband went to work with a screwdriver and an hour later had the stairs clear of skin-shredding metal. The surrounding floor, however, was adrift in the little buggers. My hunk was not careful how the staples came off. They just needed to come off. Not including sweeping, hunting, and fetching, total time: 2 + hours.

Remove the particleboard â€œbullnoseâ€ on the old tread. The “bullnose” is that little lip, or overhang, that catches your toe and makes you trip when going up a set of stairs. It is a vital component to home ownerâ€™s insurance policies and Americaâ€™s Funniest Home Videos clips.

On YouTube, the guy made removing the bullnose look like he was cutting off a pat of butter with a warm knife. â€œOh, by the way,â€ he said, â€œyou wonâ€™t be able to get the circular saw all the way across, so just take a hammer and a chisel, give the uncut portion a whack, and that baby will pop right off all smooth and pretty.

My darling brought in extension cords, hammers, chisels, a circular saw, a jigsaw, pencils, markers, a level, and a big slab of optimism. I gathered Band-Aids and the vacuum cleaner. This was going to create a lot of sawdust. Hopefully not a lot of blood, but a lot of sawdust. He drew a line where he needed to cut, took a deep breath, and fired up the circular saw. Sparks flew, the blade shrieked, sawdust darkened the air, and the cut looked oddly lopsided.

Me: Canâ€™t you go straighter?

We continued the slash and burn assault down each step, leaving about four inches of uncut bullnose on each side of the tread where the saw blade could not reach. My guy manned the hammer and chisel, gave the uncut portion a whack, and absolutely nothing happened. More whacks, more nothing.

Him: Iâ€™m going to try to cut it with the jigsaw.

Under normal circumstances, I believe the jigsaw blade goes up and down rather like an exaggerated evil sewing machine. But for some reason, the blade struggled to cut through the particleboard. By the time he got through the first four-inch section, the air smelt of burnt wood, and he was sweating profusely.

Me: Iâ€™ve never used a jigsaw, but would you like me to try?

He tossed it at me like a hot potato and busied himself elsewhere. Hunkered in concentration, I threw my shoulders into the work and slowly, slowly, slowly, cut through the other side. The bullnose came off. Whew! As I fought my way through the next cut, some black part-thingy flew off the top of the jigsaw. It was quickly followed by a spring that zinged past my husbandâ€™s head.

Him: What the heck was that?

Me: (looking at the blade now rotating like Linda Blairâ€™s head in The Exorcist) Um, the Jigsaw is falling apart. I donâ€™t think the blade should be doing what it is doing right now. I watched for green spew to come out of the jigsaw. Surely it was possessed.

Being deeply concerned for my safety, he looked at the jigsaw and slapped the black thing back on. The spring remained spinning on the floor.

Him: There you go.

He handed it back.

Me: Ummmm. I donâ€™t know that I want to be using a cutting blade when parts that probably have a purpose are left out.

I hit the â€œonâ€ button, the blade went berserk (not up and down), and the black thing once again took off like a drone on a fighter pilot mission.

I handed him back the jigsaw and said I was going to take the dog for a walk while my body parts were still intact. My tongue, bloody from biting back unsaid words, healed in the afternoon sunshine. When I returned, he was just finishing the cut on the last bullnose piece.

That guy I married: Heh, heh. It turns out the jigsaw had a super dull blade. Once I put on the new blade, the thing worked great.

Our eyes met for a moment, and not in a good way.

Measure, cut, glue, and staple in the new treads and risers.

The following day I had a morning meeting to attend. He decided heâ€™d be okay working alone on this last phase, and I expected to come home to our new stairway.

As I drove into the garage, I noticed the air compressor hose going in through the front door, which stood ajar.

My roommate: Keep an eye out for the cats. The door has been open, and Iâ€™m not sure if they went out. (Our cats are strictly indoor cats and have zero survival skills.)

I looked at the stairway and saw nothing had been done.

Stranger bearing a slight resemblance to my husband: It turns out thereâ€™s a lip on the side molding, and once I cut the riser to the proper length I canâ€™t insert it because there is no room. The only thing I can think to do is cut out a section of the lip, hope the riser will fit through the slot, and then slide it down the length of the stairs to the first step. I promise Iâ€™ll make the hole I create look good once Iâ€™m done.

Well, he cut the molding. It looked a little like a beaver on a drunken bender had attacked it, but he said he would make it look right later, so what the heck. Â He tried to fit the riser through the cut. It still wouldnâ€™t fit. He cut a chunk out of the molding on the other side. The riser fit! Jubilation! He slid it down the length of the steps only to discover it was too wide. The riser went back up the steps for additional trimming. Back down.

When, at last, it fit, he glued and nailed it into place. Each step had to be custom measured because no two treads or risers fit the same. It was slow and tedious work. 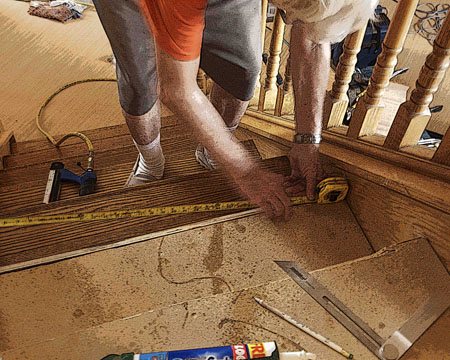 The stairs to hell are paved with good intentions.

The new stairs look gorgeous. All the surprises and cranky moments melted away as we stood in the glow of our DIY project. I put my head on his shoulder and told my love that he was the man! I couldnâ€™t wait until he fixed those awful holes in the molding to finish the â€œhalf-dayâ€ project.

Him: Yeah, about that. I have no idea how to fix those holesâ€¦Â

How about you? Have you and your partner ever tackled a DIY home project? How did it go?