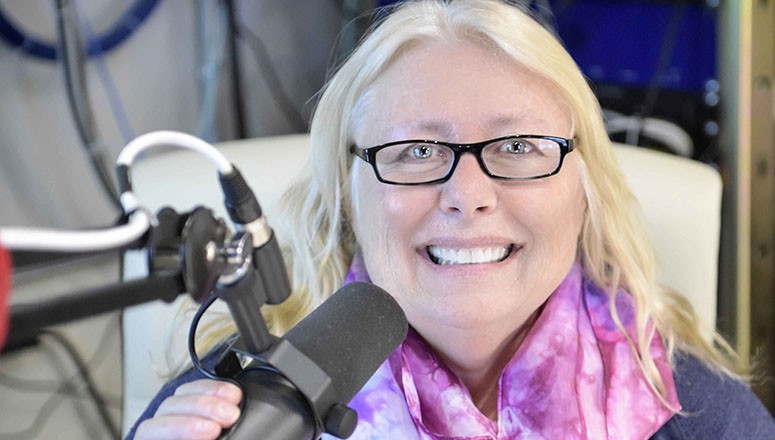 If it werenâ€™t for Philo T. Farnsworth, inventor of television,

Hot pink headphones. Soothing voice. Eclectic music selection. Sitting behind the desk in the “big chair,” Linda Cullen Gallagher keeps track of no less than four computer screens as well as a thick stack of on-air scheduling. And while she started as a salesperson for KBEK radio, when she sits in as host of KBEK’s morning radio show magic happens. Allow me to introduce you to my April ambush silk scarf modelâ€¦

I first met Linda last fall at an Old Hwy 61 Coalition informational meeting. It was one of those moments where two strangers know they have a mysterious connection. The why or how of it didnâ€™t matter, we just flat-out liked each other. On that first day we said little beyond basic introductions, but then life started throwing us together at other venues. Linda kept inviting me to North Folk Winery’s ladies night out and when I finally managed to show up we got to know each other better.

Linda is an accomplished woman. Her resume is an embarrassment of riches. As a photojournalist, she traveled the world giving a voice to the voiceless.

Hereâ€™s a snippet from her Linkedin profile:

I am based in Stanchfield, MN. USA, but my work has taken me throughout Asia, the Mid-East, Central America, and Africa. I am very comfortable working in difficult situations in areas of conflict including Afghanistan, Pakistan, Kashmir, Haiti, and Sri Lanka.

I have had extensive high-risk security training and lived and worked in Baghdad Iraq in 2004-2005. Then embedded with the Red Bulls in Iraq for Clear Channel Radio.

Eventually the â€œclose callsâ€ started weighing on her and she came home. Although she remains a photojournalist and a photographer, her career took a turn towards another much-loved interest. Linda became the executive director of Fifty Lanterns International, a solar lighting nonprofit. Through her work, she met Mike Gallagher, a retired teacher from Century College in White Bear Lake, Minnesota. Mike had taught environmental science and helped organize its solar technician-training program. He also instituted a training partnership between the College and the Minnesota Renewable Energy Society (MRES).

In time talk about solar panels was not the only thing heating up. They decided to build a net-zero home on Mikeâ€™s land in Stanchfield. They named the home and land Peacefield Farm. You can find out more about their home building process here.

Last August, before the house was complete, Mike and Linda married on the property.

As I sat mesmerized by Lindaâ€™s story, she casually mentioned how she had found her way onto the KBEKâ€™s airwaves. (I wonâ€™t go into details, but she essentially pinned the owner against the bar one evening and said, â€œI am going to work for you.â€ He, um, agreed.) How could I not like this woman? Photographer. Journalist. Solar Power advocate. Mother. Wife. Opportunity maker and shaker.

Wow. I sipped my wine and wondered if baking cookies-the thing Iâ€™m good atâ€”even measured on the life accomplishment scale.

Dreams Let You Go Wherever You Want

That night I had a dream that Linda and I were sitting in the KBEK studio talking about the wonders of being midlife women. We were laughing and sharing the good, bad, and fugly of forging paths as Boomers. Keep in mind I had never seen KBEKâ€™s studio, nor had I ever been on the radio as a guest. Dreams let you go wherever you want, and do whatever you want. I like dreams. 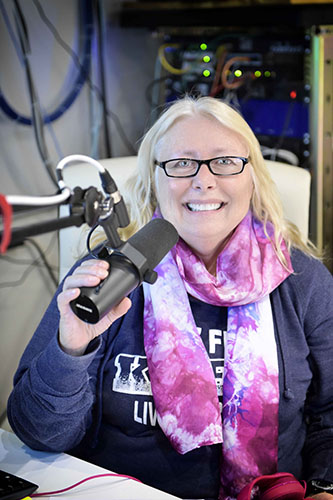 Last week I asked Linda if she would consider being my ambush model for April. To make it easy I said I would drive to Braham during her morning radio show, snap a quick photo, and be on my way. She graciously accepted.

When I arrived, I was ushered into the warm and inviting KBEK building â€œin beautiful downtown Braham.â€ I didnâ€™t know if I needed to tip-toe around, so I went in as quietly as possible. Linda was in the thick of the morning broadcast, but took the time to wave me in, gave me a hug, and said, â€œDo you want to go on air?â€ Honestly, the thought had not occurred to me. I was more worried about getting the lighting right for the photograph of Linda wearing one of my silk scarves. â€œUm, sure,â€ I said with all the confidence I could muster, and that wasnâ€™t much!

Linda handed me a pair of headphones. Hers are neon pink and perfectly suit the wearer. â€œWhat do I do with these?â€ I said.

â€œThey will help you hear yourself talk because we have a 5-second delay.â€

After a commercial break, Linda invited me to talk about Aging Schmaging. I think I blathered on about my Playshops, and that my reason for being in the studio was to promote my monthly website silk-scarf giveaway. It was kind of a blur. Linda kept smiling at me and had a look in her eyes that said, â€œYou are doing fine. Relax.â€

I wrapped up my two minutes of fame and Linda put on a song. I told her she had just made my dream come true. Who knew Linda and I would actually end up on KBEK radio talking and laughing about midlife women? I couldnâ€™t stop smirking at the synchronicity.

Thank you, Linda, for the opportunity. And thank you, KBEK radio, for being such a unique and delightful part of our local culture.