You are here: Home / Musings About Aging / Why Life Is A Picnic If You Stop Moving Forward: And What You Miss By Quitting Too Soon 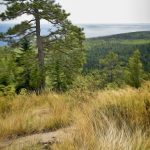 There, just beyond the puny pine tree, was the ledge. Beyond the ledge was a dramatic drop down, down, down to a boulder-strewn forest floor. And beyond the death drop was Lake Superior. Looked like a good spot for a picnic to me! My stomach growled in agreement.

I should have had breakfast before heading out on the Superior Hiking Trail just west of Tofte, Minnesota. But I didnâ€™t. My husband, the smart one in this couple, had eaten a hearty meal and downed a good amount of liquid. His Eagle Scout roots were strong, and he had hiking on his mind. Lots of hiking.

He: â€œNaw. Letâ€™s head off in that direction. I bet there are even better views of Lake Superior.â€

Me, staring at his backpack and the food within: â€œSuuuuure. We can wait on lunch for a little while.â€

We wandered deeper and deeper into the woods. It was beautiful, but I was beginning to hallucinate that the trees were giant sticks of beef jerky. Twenty minutes later my boy scout, with high confidence, said, â€œIt appears we are moving away from the lake.â€

I glanced around. Dense forest and a meager trail as far as my eyes could see. â€œYep.â€

He: â€œLetâ€™s go back the way we came. Maybe we have to go further the other way to see more of the lake.â€ His energy was still way too high, or Iâ€™m sure I could have tackled him and ripped the backpack open with my teeth. I fantasized about a wolf taking down a deer in a similar manner. But I love my husband, so I smiled instead.

Me: â€œSweetie, when we get back to that flat rock can we have lunch? Iâ€™m a little hungry.â€

We retraced our steps, but for some reason twenty minutes one way felt like two hours the other way. Eventually, the open space with the rock ledge appeared.

He: â€œI think if we keep going weâ€™ll find and even better spot.â€

Me: â€œLunch, lunch, lunch!â€ I was starting to go feral.

He: â€œOkay, but I still think there might be a log or something further ahead to sit on. Iâ€™m not wild about sitting on the ground.â€

Perhaps it was the drool coming out of my mouth, or the crazed look in my eyes, but he put down the backpack with a heavy sigh. His knees are a bit stiff these days and getting into a comfortable sitting position took a lot of effort.

We sat and enjoyed our sandwiches while looking off at the various shades of blue in the sky and water. Well, let me take that back. I scarfed down my sandwich while he picked at his. He was still full from his breakfast. When we decided to pack up and move on he glanced over at my lunch box.

He: â€œDo you want me to put the other half of your sandwich in my backpack?â€

Me: â€œWhat other half?â€ I dabbed my napkin to the corner of my lips in my most lady-like fashion.

He: â€œWhat theâ€¦? You rarely eat a whole sandwich.â€

Me: â€œDid I mention I was HUNGRY?â€

Wisely, he kept quiet. I stood up, and I held out a hand to him. He twisted to the left, pulled himself over on his side, and tried to get up on his hands and knees. There were grunts and groans involved. After a few tries, he was up.

He: â€œIt would have been nice to have found a downed tree or something.â€

Me: â€œLook, Honey, the lake!â€ It was a blatant attempt to change the subject, and he wasnâ€™t buying it. We hoisted our gear onto our shoulders and moved on.

Not five minutes later we rounded a curve in the trail. Another vista of Lake Superior opened far and wide. And there, on a slab of rock, stood a rustic, sturdy, wooden bench. I mentally ticked off the reality:

My husband came up behind me, saw the bench, and burst out laughing.

He: â€œI canâ€™t tell you how many times in my life that has happened. Letâ€™s go sit on the bench and enjoy the view.â€

We snuggled next to each other and absorbed the wind and the birds and the freedom of being our imperfect selves.

Later in the day, as we walked back to our vehicle, the lesson kept coming back to me. How often have I stopped short of something wonderful because I had short-term gains in mind? I didnâ€™t know there would be a bench out in the middle of nowhere. But I also didnâ€™t know there wouldnâ€™t be a bench. I should have trusted more, and whined less. It was a benchmark moment.