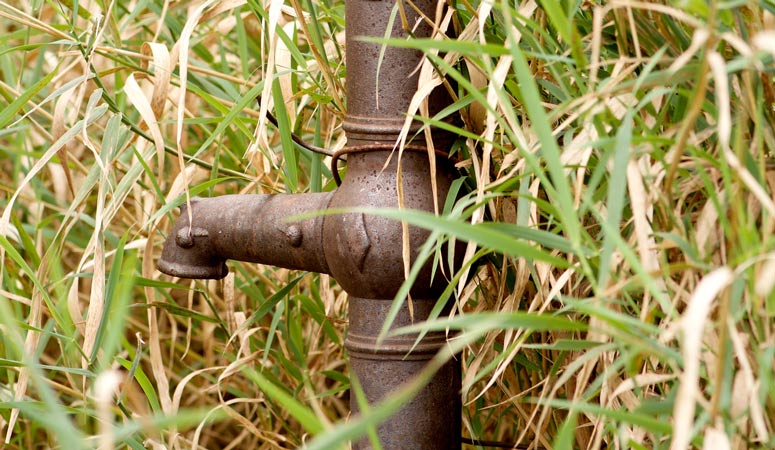 You are here: Home / The Best Part Of My Day / I Cried Today

Thistles raked my skin, and I realized how foolish I was to wear shorts and flip-flops in a pasture gone wild. Too late now! I pushed forward through grass that looked down on my head, and had me praying I wouldnâ€™t surprise a bear taking a late summer nap. My quest was to find the old water pump, the oneÂ I wasnâ€™t sure still existed. Â Many years have passed, and yet I needed to know if it was there.

When I was a child, an old buildingâ€¦my parents referred to it as a barnâ€¦ sat in the cow pasture as if a sentinel to the past. Grandma said there had once been a house, a barn, and a family with dreams who lived there. Something bad happenedâ€”Grandma would not elaborateâ€”and the only remnant that remained was the barn and two plum trees.

I loved that barn. It didnâ€™t look like a barn barn. It was a small aging square, really. The walls had long since stopped trying and the wooden boards had turned a deep, dark, sliver.

Double doors on the north side hung a bit crooked, as if nature had punched it in the face, but still dutifully servedÂ their purpose. Above those doors a small glassless window yawned black.Â I would climb up the skeleton of the wall and daydream from the vacant window. The whole world was mine, mine, mine, when I sat there.

Below me, on any sticky summer day, our horses sought shade. They shared the space in companionable comfort, sometimes scratching each otherâ€™s backs with square grass-stained teeth. I happily absorbed the earthy manure-laced smells. I heard the stomp of their hooves and the agitated buzz of flies. I felt the splintery texture of wood that had withstood time and sadness, and I saw the world for what it wasâ€¦enduring.

One summer our dairy barn caught fire and was destroyed. We lost all the newly baled hay, my momâ€™s favorite horse (ironically named Smoky), and several head of cattle. As we rebuilt, Mom and my brothers continued to milk our small dairy herd in the old barn in the pasture. Because the space was small they milked the cows in batches of three.

What I remember most about that time was the pump in the old barn. It was rusty and cranky and required a lot of muscle to get it to spew water. But after years and years and years of disuse, it still worked. The old barn, and the water pump, was an important factor in keeping our dairy farm going during that dark period of time.

Iâ€™m not sure when the barn disappeared. It caved in sometime after my mom and dad divorced as if it simply could not handle another tragedy. By then I was married to my first husband, and had my son. When Iâ€™d visit Dad at the farm I HAD to go into the pasture, find my horse, and stop at the old barn. Sometimes I would pump the makeshift handle just to see if water would still materialize. Iâ€™d count as I pumped, as if that made a difference, and sure enough water started to spit. Sputter. And puke out a rusty red fluid. The continuity gave me hope that bad things could be overcome.

Somewhere around that time Dad said he wanted me to someday have the ten acres that bordered the highway. That land included the old barn, the pump, and the memories. â€œYou can build a house and retire there,â€ he said.Â Â  We planted a number of evergreen trees in the pasture, believing that the future would be healthier than the past.

Two years ago Dad died. He left his farmland to four of us children. As we grieved his death, and tried to sort through his legacy, one of my brothers said, â€œDad told me to be sure you got your ten acres. Whatever that means.â€ For a moment my heart connected to Dadâ€™s, and I remembered planting those trees with him by my side. I gulped back tears and said, â€œNo, letâ€™s sell the land and split the resources equally.â€ It seemed the right thing to do.

The land will soon be sold. Another family has put down a deposit, and the closing will occur. I drove the 70 miles in an attempt to find the old pump before I lost the chance to walk the land.

Amongst the sea of overgrown thistles, brush, and history, aÂ corrodedÂ form took shape. Â As I parted the grass, and found my past, the emotions welled up as rusty and as pure as the water pooling beneath my childhood. I cried for the past, and for the feeling that I had been abandoned far too soon. Â I cried because I was standing in the shadow of something sought and found. Â It was the best part of my day.