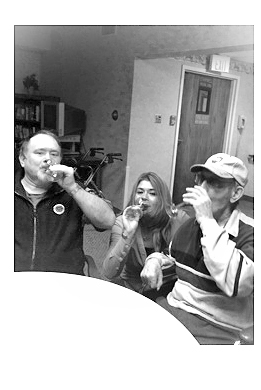 You are here: Home / Musings About Aging / How Do You Feel About Ending Life In A Nursing Home? 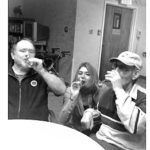 Last photo of Dad alive. He was toasting another day despite being in a nursing home.

“The TV shouted an old black-and-white film he didn’t recognize, wheelchairs facing it like church pews.”
― Seré Prince Halverson, All the Winters After

I don’t know about you, but I’ve long held a fear of nursing homes. There’s sadness that prevails despite cheery seasonal decorations and attempts at community. (It’s hard to play bingo when you can barely hear.)

Many years ago, when my grandmother was placed in a nursing home about twenty miles from her house, it was thought she might know some of the other residents and thus ease her transition.

She did recognize a few. But they only served to increase her depression at what she described as “being shelved until I die.” The neighbors who used to be part of her active social circle were now droopy husks scattered about the hallways in various versions of wheeled seating. Conversations were, at best, on a short replay loop as memories clung to shards of the long past. It turns out Grandma didn’t know her friends. At least not anymore.

“I want to go home,” was Grandma’s lament whenever I visited. Those same words came from my mom when she had a brief and turbulent stay at the same nursing home years later, and from my dad when he was placed in a nursing home after his home care became too much for my brother. It was painful to visit, and even more painful to walk away. I felt guilty for having the freedom they had taken from them.

So why am I writing about this? The book club I belong to is reading the book, Amos; To Ride A Dead Horse, by Stanley Gordon West. It’s a fictional story about a man who thought he had his life together until a car crash leaves him quickly spiraling downward into a “poor farm” type nursing home.

What ensues is disturbing, and from my experience, not terribly far-fetched. I recall visiting Dad and having him whisper to me, “You wouldn’t believe what goes on here at night when there are no visitors.”

I looked at him with concern. “What happens?”

My gentle father looked around with fear in his eyes and said, “I can’t tell you. They might hear.” 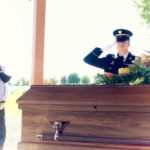 I followed his eyes but didn’t see anything, or anyone, eavesdropping. Dad shifted in his wheelchair and changed the subject. Later, when I mentioned I needed to leave, he said, “I sure hope I can go home soon. This place….” And he trailed off.

It’s so hard to know if a loved one is telling the truth, or a form of truth induced by medications, or if they misinterpret actions and conversations.

In the book, Amos; To Ride A Dead Horse, nobody believed the residents at the nursing home. They were the outcast, the poor, the deranged and discarded. And that is why abuse blossomed.

I know there are gifted and caring people who work in nursing homes. My mom worked at a nursing home and did her best to be cheerful with the residents even when there was a diarrhea outbreak, or some of them would sneak out the back door to make a break for it. “You wouldn’t believe how fast some of those folks can run!” she’d chuckle. “Faster than me, that’s for sure.”

But Mom also said she saw far too much overmedicating because it was simpler to care for people who seldom woke up.

Reading the book certainly stirred up a lot of memories about visiting my loved ones in nursing homes. Rationalizing they were getting the 24/7 care they needed never, ever, covered my sense of somehow betraying them.

So how do you feel about nursing homes? Do you want to end your days in one? Please share.