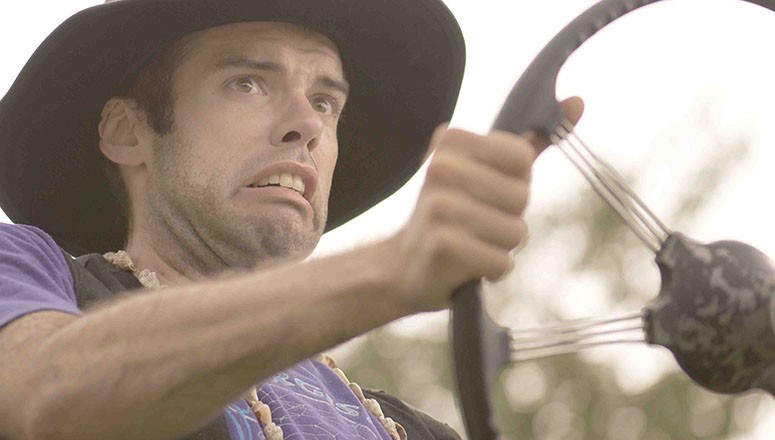 You are here: Home / The Best Part Of My Day / Hot Flashes and Giggles: When The Bed Shakes In The Middle Of The Night

Do you know someone who is a natural storyteller? Someone who lures your attention, captures it, and never lets go? I do. Itâ€™s my son. Over the years, he has told me stories that have left me breathless from laughing and crying. He has a way of using facial inflection and voice variations that bring his words to life. Let me tell you why I was making the bed shake at one a.m., and itâ€™s not for the wink, wink, reason you may be thinking.

Once a week I meet my son for dinner. We hug, we eat, we fill each other in on our shenanigans. Tonight, when he started to tell me about his work, I wasnâ€™t expecting to lose it with laughter, but I did. And it wasnâ€™t just a chuckle. It was a head on the table, wheezing for breath, canâ€™t look him in the face or Iâ€™ll die laughing, laughing. This is roughly how the story went â€¦

Son: So, sometimes if I take my eye off the CNC machine for one second it will start to cut the boards on the diagonal instead of in straight lines. (He uses a napkin and a finger as cutting blade to give me a visual.) When this happens, the whole mess ends up in the scrap bin, which is bad enough, but sometimes when it cuts off a small corner, the trajectory of the spinning blade sends the chunk of wood flying like a missile.

Me, half-smiling, half-concerned: Isnâ€™t that dangerous?

Son: Yes. It can be. Recently we had some temporary workers at the shop to help out with a big project. One of those guys was rather beefy and unusually crabby. I tried to stay out of his way.

Me, smiling as I think about that pictorial.

Son: I was running a batch of boards on the CNC machineâ€”all was fineâ€”and then I turned away to grab another board from the pallet. When I turned back, the machine had gone wonky and was doing its diagonal-cut thing. Before I could stop the machine, a corner of woodâ€”small, but sharpâ€”went blazing across the room like a comet. The big beefy guy had his back to me when it struck him smack on the head.

Me, starting to birth a laugh during a pregnant pause: What happened then?

Son: Well the guy put his hand to his head, and then slowly started panning the room to see who had thrown a chunk of wood at him. He was not happy and acted like someone was out to get him.

Me, squirming not to laugh. You shouldnâ€™t laugh when someone gets hurt.

Son: As heâ€™s turning to scan the workers our eyes lock. I didnâ€™t know what to do! And so I did the worst thing possible– I gave him one of those toothy frozen-face smiles. The guy holds up his hand and shows me a little blood. I couldnâ€™t stop myselfâ€”Lord only knows whyâ€”but I smiled bigger.

Me, tears streaming from my eyes as silent shaking takes over my body.

Son, seeing me cracking up: I know, right? It is kind of funny. Or it was until I realized this human slab of anger was probably going to come over and beat the spit out of me. My heart was pounding like thisâ€¦(he pantomimes squeezing his heart while making a sucking squishy sound).

Me, head on the table, laughing into my napkin: Did he? Did he beat the spit out of you?

Son: Nah, he stormed into the office and told the manager. A few moments later the manager wandered over and asked what happened. I explained the machine sent the chunk flying, and he said, â€œYeah, that happens.â€ But geez. The tough guy stayed in the office for over two hours, and then he never came back to work.

Son: Well, not really. A woman at the shop stopped by and showed me several bruises. â€œWhat a whiner that guy was! Iâ€™m getting hit by flying wood pieces all the time. Pfft. Wuss.â€

Maybe it was the timing of the story. Maybe it was because Iâ€™d had a stressful day. Maybe I just needed a cathartic giggle dump, but I couldnâ€™t stop laughing. Mostly because of the way my son reacted to the anger of the behemoth guyâ€¦ wide-eyes coupled with a frozen smile that implied intention and guilt.

Late at night, I had another fit of laughter as I thought about it. My body shook, and my nose ran. For a brief moment, my husband joined in because giggles are contagious, and then pleaded with me to go to sleep. I laughed harder. He turned over and put a pillow over his head.

Good stories and healing laughter? The best part of my day!