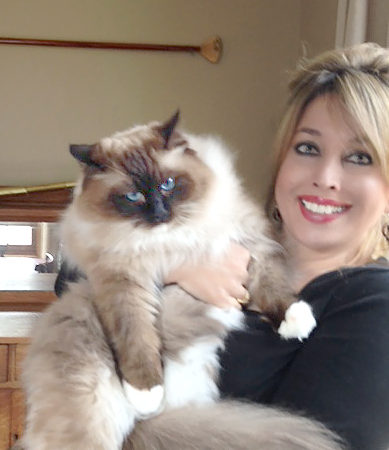 You are here: Home / Musings About Aging / Fur Real: Why Cats Are Good For Our Health 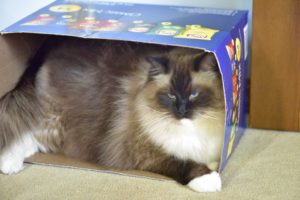 Grizzly, our 22+pound “Grandcat.” He likes to think inside the box.

“I have lived with several Zen masters — all of them cats.”
― Eckhart Tolle

If you don’t like cats, look away now. LOOK. AWAY. Why? Because I’m going to share a few reasons why cats are good for our health and wellbeing. If you think cats are pretty badass and cool, this blog is for you…essentially cat-goodness validation on a silver platter. (Speaking of silver platters, I think my cats wonder why their food is not served on one. They get a particular “look” on their face when I set the dishes down. On the floor. As if they are mere animals. Pooooooor babies.)

I grew up on a small dairy farm, which meant cats were as much a part of the life-cycle system as air and water. There were the barn cats that kept the mice population down and the house cats that received special privileges for no particular reason that I can recall. I adored them all.

The barn cats, aka barn bosses, would wait semi-patiently as my mom and brothers milked the cows. They knew a dish of frothy, udderly delicious, milk would soon become a communal meal. I don’t recall any hissing or fighting. At least among the cats. My brothers and me, however…FFFFFFFFFFT!

Some neighboring farms had feral barn felines. Those cats were not seen as pets but strictly mice and rat exterminators and, frankly, were rather scary. On our farm every cat had a name and was thoroughly handled and played with from birth. I can still see my dad, with his construction-work calloused hands, gently petting our cats as they rubbed against his leg. My grandmother used to say you could always tell a man’s nature by how he treated animals. I witnessed from early on that my dad was a good, good, man. It was a powerful lesson.

Okay, enough about my experiences with cats. 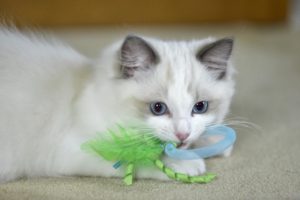 Goose, our other “Grandcat.” Cue adorable.

Here are some tidbits concerning cats and wellbeing I promised earlier…
According to an online article by RJ Skinner titled Science proves that cats are even more awesome than we thought:

Cats are totally into us…
A recent study from Oregon State University claims that cats not only enjoy human interaction, they may even enjoy it more than food. 50 cats were denied human interaction, food, toys and scents for a few hours. They were then re-introduced to the four stimuli and 50% of the felines chose human interaction over the other three possibilities. These findings not only suggest that cats are more social than we thought, but also has ramifications on how we can train them; the old treat method might not be that effective. This also proves that they’re nicer than us; what human would choose talking to someone over a slice of pizza?

...they just don’t need us!
Of course, dogs always seem more excited to see you than cats. It’s not that cats aren’t excited, they just don’t need you. A University Of Lincoln study found that cats are less dependent than dogs on their owners for safety and security. The study took cats with their owners and placed them in unusual environments to track how the cats behaved. Although the cats certainly enjoyed the company of their owner, they exhibited less reliance on their owners in this new environment. It’s quite reassuring to know that – although they enjoy your company – when something goes down, cats prefer to handle it on their own.

They can help you pick up…
A classic pickup maneuver is taking your dog to the park, because who can resist talking to someone with an adorable puppy? However, a UK survey found that 90% of single women surveyed believed that men who own cats are perceived as “nicer” than those who don’t. The majority of male and female respondents believed male affection for felines to be a positive attribute while most male cat owners surveyed stated their cats provided much-needed cuddling time, and who wouldn’t want to date a man who says that? So, if you’re looking for love, put a leash on your kitty and take it for a walk.

…but why bother when they’re so much better than dating!
Can’t find somebody you like? Don’t worry about it; your cat might be a suitable replacement. Another study from the University Of Vienna found that the cat/human relationship closely mirrors the human-to-human bond. Many interesting dynamics were discovered; cat behaviors mold to their owner’s personality (the bond seems most intense with female owners), both subjects can effectively communicate to each other through subtle expressions, cats can remember and respond to their owner’s acts of kindness, and cats can knowingly manipulate their owner to get what they want. Okay, the last point is a tad evil, but still impressive; that thing clawing your couch is pretty much in a relationship with you. 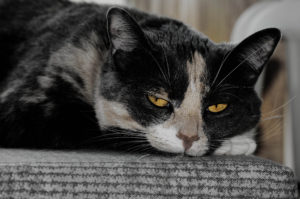 Pudgy. Our cat. Don’t mess with her.

They prove you’re super smart…
If anyone calls you “stupid” for owning a cat, you may want to refer him or her to this. Research into the personalities of dog owners vs. cat owners revealed that, while dog owners tended to be more lively, outgoing and rule abiding, cat owners scored higher in general intelligence. Now the first result seems obvious – of course dog owners are more energetic and obedient; they seek similar traits in their pet. On intelligence, a 2010 study also found that cat owners were more likely to have a university degree than dog owners – surmising that, because cats require less maintenance, they are more popular with those working longer hours. Rejoice, you’re a genius.

They keep you super healthy…
You’d think a pet that sleeps for most of its life wouldn’t provide ancillary health benefits; but your feline is doing a lot to keep you fit. A study by the University Of Minnesota found that owning a cat could reduce your risk of heart attack by 30%. Many surmise that a cat’s generally calm demeanor and interactions act as a great stress reliever for their owners. It was also discovered that, although cats have a high allergy rate amongst humans, exposure to cats at an early age can actually decrease the risk of allergies, not only to pets, but dust mites and ragweed while boosting your overall immune system. Most surprisingly, it is commonly believed that cats can act as a great social interaction tool with children who have autism.

…and they can even heal themselves!
The purr is a mysterious occurrence; often thought to indicate that a cat is happy, research has uncovered a much deeper significance than that. Cats seem to purr for a variety of reasons, but the sound frequency at which they do so seems to stimulate their muscle and bone regeneration; a most efficient method to keeping themselves healthy. This discovery has unlocked potential research for humans – could creating such a frequency within the human body prevent atrophy in a similar way? Remember that the next time your cat curls up on your lap, they might be on the cutting edge of a scientific breakthrough. 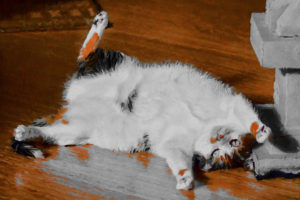 Our cat, Giese Alvina. Pure love wrapped in furry softness. The last cat taken from my dad’s farm before it sold.

Having them take over the internet is the best thing for all of us…
It’s safe to say if you have the Internet, you’ve watched a cat video (some of us can be slightly obsessed). But there’s no need to feel viral feline shame, because watching cat videos can significantly boost your mood. Cat video-watching has been shown to improve viewers’ overall positivity and energy, while decreasing negative moods (like sadness and anxiety) as well as masking remorse from procrastination. So next time you don’t want to do your work, be thankful for science and cats.

So there you go! I am not a “dog person,” or a “cat person,” I am an animal person. That said, cats hold a nearly mystical something for me. No matter the kind of day I have had, when one of our cats jumps in my lap and starts purring, life takes a turn for the better. Maybe not purrfect, but oh so much better.