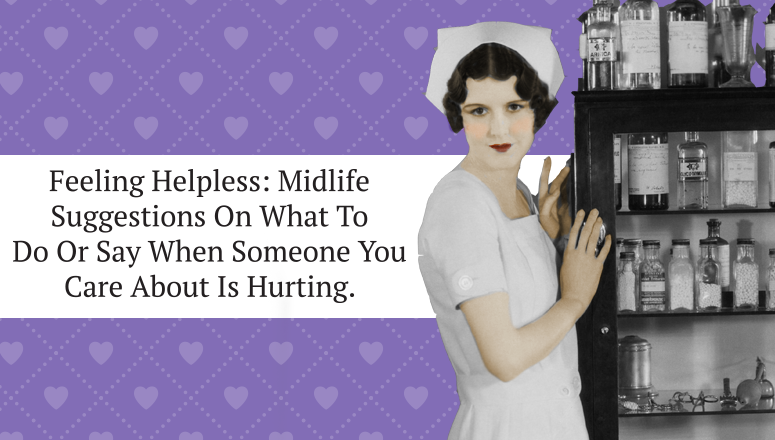 You are here: Home / Musings About Aging / Feeling Helpless: Midlife Suggestions On What To Do Or Say When Someone You Care About Is Hurting

â€œToo often we underestimate the power of a touch, a smile, a kind word, a listening ear, an honest compliment, or the smallest act of caring, all of which have the potential to turn a life around.â€

Earlier this summer our neighbor fell from the horse she was training and broke her neck.Â  As the shock set in that she might be permanently disabled, my husband and I floundered. How could we help out?Â  What could we do or say during a time of great uncertainty?

My husband, being a man of action, started to create a list. He would do A, B, and C.Â  I could do 1. 2. And 3? And while I understood his need, I questioned if we were adding to their stress by pouncing upon them.Â  Our neighbors tend to be private people. Where we making assumptions that they needed or wanted A, B, C, and 1, 2, 3 from us? What was the kindest way to offer our support given their preferences?Â  We didnâ€™t know, and it felt awful.

Perhaps I was a little informed because of my friend, Dr. Claudia Kittock. She told me it drove her crazy when her family and friends â€œhoveredâ€ as she dealt with colon cancer.Â  Inside the chaos of her treatments and consequential side effects the last thing she wanted to hear, repeatedly, was â€œwhat can we do?â€Â  That put the burden back on her in a strange wayâ€¦and she resented having to make decisions when she was so weak.Â  For my part, and Iâ€™m not saying this was good or bad, I tried to make Claudia laugh.Â  For instance, I gave her one of those little paper umbrellas used in mixed drinksâ€”I believe it was bright pinkâ€”and told her to put it in her whatever horrible cocktail they served during her cancer treatments.Â  Itâ€™s all in the attitude, right?Â

I went online and found this article by Cody Delistraty, posted in The Thought Catalog.

I hope it helps!Â  And, if you get a moment, would you be willing to share some ideas or experiences that you know are appreciated by those in need?

7 Things To Say To Someone With A SeriousÂ Illness

We were walking along the Canal St. Martin, back from our favorite bakery, when Mom felt a lump in her armpit. It was her last day in Paris, and the first day she discovered she had cancer.

That was my first year in college, and since then, Iâ€™ve learned a lot â€” everything from Plato to Impressionism to Goethe to French politics. But that nowhere nears the importance of what Iâ€™ve learned about cancer and endless hospitals visits and what itâ€™s like to walk with someone through the proverbial dark tunnel, a tunnel where death is omnipresent and the light we carry flickers, apt to go out at a momentâ€™s notice.

Sheâ€™s been in and out of the hospital ever since she returned from France, and sheâ€™s had loads of visitors. From guilt-ridden, nervous aunties from the Middle West to close friends sheâ€™s had since childhood, all of her visitors love her and want the best for her. But some donâ€™t quite know what that means. What is best for her? Iâ€™ll admit I didnâ€™t really know how to act at first. Itâ€™s always a surprise when someone close to you becomes entirely vulnerable, bald, seemingly ever on a hospital bed, their life entirely changed.

What does one say? What can one say without being insensitive or unhelpful or, the worst of the worst, negative?

Itâ€™s a tricky maze to navigate, but there are things to say, conversations to start, memories to conjure that will make your presence bright and your visits beloved. Hereâ€™s a brief guide of what to say, coming from way too much experience:

â€œIâ€™m here for you and entirely at your disposal.â€

Donâ€™t say, â€œWhat can I do to help?â€ This is vague and almost never actually helpful. It makes him/her feel pressured to think of something so youâ€™ll get to do something to feel better about yourself. Instead, show that youâ€™ll always be reachable, that youâ€™d honestly do anything for them. But youâ€™d better mean it. The friends and family who make themselves this available are the ones who get the late night, teary-eyed phone calls, who have to act as guide through the toughest times and show that life is still worth living, even when itâ€™s hell.

Pain comes from needles and physical discomfort but also from hopelessness and a worldview entirely rooted in the illness at hand. Ask about travel, falling in love, big life moments that put their minds both on past pleasures and future plans.

â€œThere are so many people that love you.â€

Mom sometimes feels entirely undeserving of love since sheâ€™s been diagnosed. Itâ€™s an odd phenomenon. Youâ€™d think that the sick and vulnerable would be clamoring for sympathy, but often many feel that theyâ€™re an emotional drain on those around them â€” that theyâ€™re unworthy of other peopleâ€™s time or visits or even thoughts. A simple reassurance of the truth goes a long way: that theyâ€™re loved, that theyâ€™ve an entire army of people who love them across the city, the country, the world.

Whether you believe in cosmic justice or god or if you stand on the side of optimism or cynicism, you should put some real thought into the letter correspondence between the famous French and Swiss philosophers, Voltaire and Rousseau. Voltaire, ever the pessimist, says that since the world is full of evil god must be unjust. Rousseau, a philosophical optimist, rebuts Voltaire, ending his letter with this:

â€œI cannot prevent myself, Monsieur, from noting a strange contrast between you and me as regards the subject of this letter. Satiated with glory and disabused of vanity, you live free in the midst of affluence. Certain of your immortality, you peacefully philosophize on the nature of the soul and, if your body or heart suffer, you have Tronchin as doctor and friend. You however find only evil on earth. And I, an obscure, poor and lonely man, tormented with an incurable illness â€“ I contemplate with pleasure in my seclusion and find that all is well. What is the source of this apparent contradiction?

You explained it yourself: you enjoy, but I hope â€” and hope beautifies everything.â€

Itâ€™s one of the finest defenses of pure hope, and Rousseauâ€™s optimism, even in the face of poverty, loneliness, and incurable sickness holds obvious and powerful application to anyone with serious illness.

â€œThis will all be just a blip when we look back on it.â€

Contextualizing their pain within the greater scheme of their life is unbelievably important. You donâ€™t want to say, â€œYouâ€™ll be great soon,â€ but, instead, drop a reminder that this illness doesnâ€™t constitute their identity, that their lives are so much grander, that theyâ€™ve enjoyed life before and theyâ€™ll enjoy it later. And that lovely â€œwe.â€ It can be infantilizing if done wrong (â€œhow we doing today?â€), but when used correctly itâ€™s implicitly binding, their pain is your pain, their cares are your cares.

â€œDonâ€™t worry about keeping me in the loop.â€

The last thing you want to be is a burden. But thatâ€™s exactly what you are if youâ€™re endlessly calling and emailing. Asking â€œAre you okay, whatâ€™s going on?â€ comes from a good place â€” from genuine caring â€” but the last thing someone whoâ€™s really sick wants to do is keep their entire extended social network updated on every surgery and doctorâ€™s visit. Even with close friends, itâ€™s difficult information to share. Itâ€™s tough to admit that your body is failing you and that you donâ€™t know what will happen next. Plus, more practically, itâ€™s time-consuming and just plain tiring to keep everyone in the loop. Instead, show your care by doing any of the aforementioned or by simply saying:

Accomplishing a task, be it grocery shopping or cooking dinner or picking up the kids from school, will be almost uniformly appreciated. Youâ€™re making their life easier during a particularly tough time. Itâ€™s practical, de-stressing, and shows you love them. You should say â€œI love youâ€ â€” there are few words that work as many wonders as these â€” but you donâ€™t always have to. Sometimes showing your love is even more appreciated.

P.S. And, honestly, when in doubt, do what my mom and I do and just listenÂ to Mozart. This clarinet concerto sounds like mercy and otherworldly beauty cutting through a dark world.

P.P.S. And thanks to Olivia Gonzalez for digging up that choice Rousseau quote.