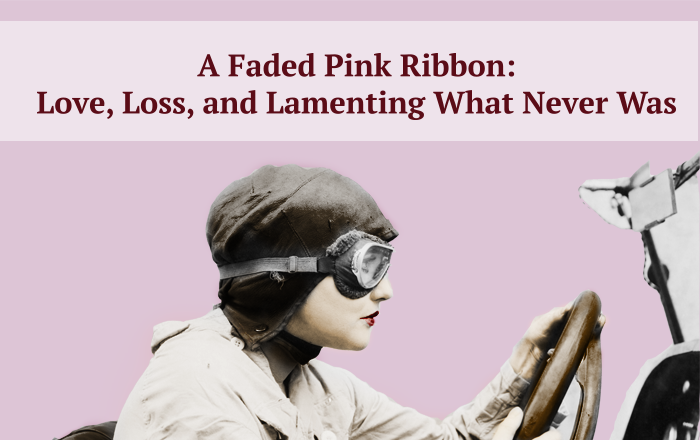 You are here: Home / Musings About Aging / A Faded Pink Ribbon: Love, Loss, and Lamenting What Never Was

I wrote this some time ago but wanted to bring it back.Â  A few weeks back, on the anniversary of my motherâ€™s death, a woo woo moment occurred at her gravesite.Â  My sister had just visited a psychic.Â  The woman asked who the third child in the family was because Mom had a message for that person.Â  I am the third child.Â  The communiquÃ©, in a nutshell, said she knew of my struggles and that I should call on her spirit to help me.Â  She loved me.Â  Mom and I had our fights, but she was always, always, there when I needed her.Â  It seems in life, and in death, that has remained our bond.

Thrum, bump, bump. Thrum, bump, bump. My finger tapped along to an oldie playing on the radio as the patchy asphalt on I-35N kept my tires in a rhythmic beat. It was a beautiful midweek summer dayâ€”the kind one thinks of while scraping an inch of ice off the windshield in Januaryâ€”blue sky, puffy gray smudged clouds, and a temperature just below sweating range. Traffic was light. A handful of slow moving campers owned the right lane as sportier, less family laden cars whizzed by in disdain. I fell in between a mini-van with a â€œGrandmaâ€™s Taxiâ€ bumper sticker, and a Winnebago wearing a four-bike corsage. I was in no hurry. Thrum, bump, bump. Thrum, bump, bump.

Road distractions, ranging from billboards promising ultimate adventures to the north and maze-like road construction barrels, held my attention until the radio faded to static.Â  I was trying to stay light-hearted and in the moment, but eventually, my mind wandered to the reason for the driveâ€”a long overdue trip to visit my mother.

Dad, twenty plus years divorced from Mom, had never given up on the belief she would come to her senses and return to his life and bed. She didnâ€™t, but her absence seldom interfered with his need to keep her front and center in our lives.Â  The guilt calls usually went something like, â€œHow long had it been since I made the drive to see her? Was I aware my brothers had visited Mom on her birthday? They had brought flowers.â€Â  Okay, Dad. I get the hint. I was on my way. Thrum, bump, bump. Thrum, bump, bump. Lord give me strength.

Mom and I had always shared a contentious relationship. And yet as reasonable as that seemed, I longed for the day when she would freely share her thoughts and dreams with me instead of her disappointments. Unfortunately, in her eyes the culmination of all her disappointment wasâ€¦ me. For as long as I could remember sheâ€™d tick off my faults as though she was reading a grocery list:

Somewhere along the way, I decided the best defense was to laminate a smile on my face and not let her know she was killing my spirit one stabbing word at a time. If her pleasure involved my pain, I would deny her any sign she was hitting her mark. Stab, suck it up. Stab, suck it up. One two three, one two three. Life is rhythms. We continued the dance until the diagnosis.Â  Thrum, bump, bump. Thrum, bump, bump.

Memories, both good and bad, played through my head as I left I-35 and took familiar roads deep into my childhood. Where had the farms gone?Â  Only vestiges of what was remained. Empty pastures, ramshackle buildings, and crippled fence lines echoed my inner emotions.Â  It seemed everything had changed, been sold, or decayed on the spot. A shiver ran through me despite the summer heat. Had I changed too?

I pulled the car into the graveled driveway, parked, and looked around. The air was heavily fragrantâ€¦someone had just mowed the grass.Â  A lilac bush planted by my brother was thriving despite spotty care. Everything looked neat, orderly, and peaceful. Gathering my thoughts, I proceeded down the path. What could I possibly say now to bring us peace?

Approaching quietly, I found her there in front of me â€¦ but she wasnâ€™t, as usual. I stopped and allowed my feelings to develop unchecked and unfiltered. This was much harder than I had imagined.

â€œHello Mom,â€ I sputtered. â€œIâ€™m sorry itâ€™s been so long since Iâ€™ve visited. How are the cribbage games going with Grandpa?â€

Arrgh! After all my grandiose practice conversations could I muster nothing but small talk?Â  Would I ever get it right with her?

Looking about in an attempt to regroup my thoughts, I noted a faded pink ribbon nestled within a bundle of withered flowers.Â  Pink ribbons?Â  Oh yesâ€¦a symbol of hopeâ€¦for those with cancer.

Mom was so pissed when she received the diagnosis. Not sad, pissed.Â  I held the looped ribbon and allowed myself to remember all if it. The hospitals, the nursing home, the hospice care.Â  Mom raging through every emotion and person connected with her eventual outcome.Â  Pink ribbonâ€¦so faded and pointless.

It was time to go.Â  I blew the dirt off and tried to plump the bow a bit before placing it on her headstone.Â  It languished next to all the words we would never say to each other.

â€œMom,â€ I started, and then fell silent.