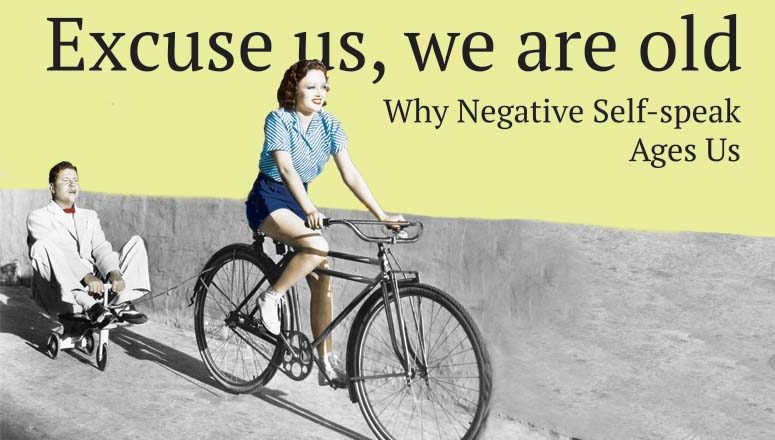 You are here: Home / Musings About Aging / Excuse Us, Weâ€™re Old: Why Negative Self-speak Ages Us

How old would you be if you didn’t know how old you were? ~Satchel Paige

Like cats wanting to be fed, the couple ahead of me at Burger King kept veering right into my path.Â  The husband (I assume) acted as though he had been dropped in a foreign land with no money and the wrong translation book.Â  He turned tight circles in front of the counter unsure of what to do or say next. Â The cashier waited patiently for their order as a lengthy discussion ensued about how they wanted their food prepared.Â  No bun on one order, extra cheese on the other, how small is small, and so on.

The wife (I assume) eventually took charge and gave the husband the task of finding a table. I was relieved to have him move on until it seemed no matter where I stood he needed to be in that exact spot too. I must have said, â€œExcuse me,â€ six times in sixty seconds.

After the wife ordered their meals the couple relocated to the drink dispensing area. I placed my order and paid in the time it took them to find the straws. Once again we bobbed and weaved for position. The wife held her empty cup in hand and stared at the ice and drink machine. Her husband stood stiffly nearby using a handful of napkins as a limp shield. Finally, the wife looked at me and said, â€œYou have to excuse us. Weâ€™re old.â€

Her words surprised me on two levels:

Positive Views of Aging Can Help You Live Longer

I have no intention of turning this into a preachy blog on ageism.Â  But the moment with the couple got me thinking about negative self-speak.Â  Did she really feel old?Â  Why? Because she didnâ€™t know how to operate a multi-drink machine?Â  Isnâ€™t that more about a lack of experience?Â  Why throw out the â€œweâ€™re oldâ€ statement?

I recently heard this statistic while at an Aging With Gusto meeting–Â  How we think about aging matters: Research shows that people with more positive views of aging live an average of seven and a half years longer than those with less positive views (Levy et al., 2002). Seven and Â½ years!

How about you? Â Do you ever catch yourself sliding down the negative-speak path when it comes to aging?Â  What do you say or think?Â  Who influenced you to think this way?Â  Can you turn it around into something positive instead?

Iâ€™m just wondering.Â  Iâ€™d sure hate for you to waste an additional 7 Â½ years of living!