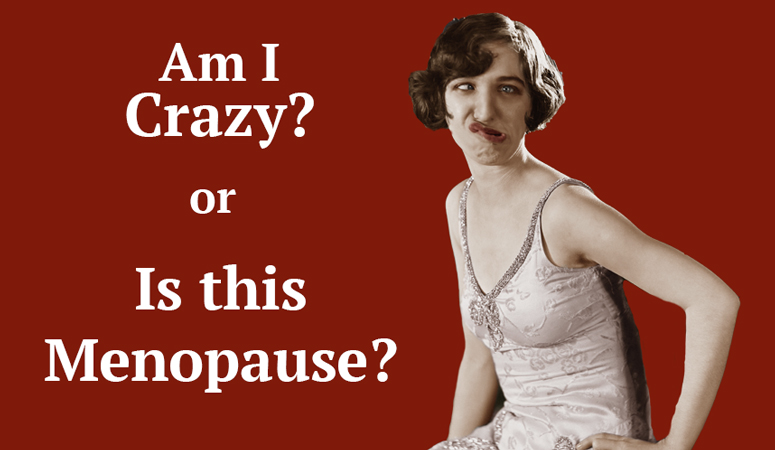 You are here: Home / Musings About Aging / Estrogen Dominance and Menopause Symptoms

No, no, no. I am not old enough to be having these symptoms. Heck no. Just because Iâ€™m putting on weight for no apparent reason, and just because Iâ€™m not sleeping well, and, oh yeah, Iâ€™m sweating like a Lutheran who had no choice but to sit in the front pew at church, Iâ€™m not menopausal. Iâ€™m not. I canâ€™t be because I donâ€™t even know what menopause means. Such were the questions I dealt with as my body began to morph into the third stage of womanhood. Not one to accept things without a bit of research, I did a little checking. I read books. I talked to my peers.

Given the randomness and time span of menopausal symptomsâ€”ranging from none to exhaustiveâ€”it comes as little surprise that only a few of the women I spoke with knew the clinical definition of menopause, or viewed the passage as a positive, natural transition, not a punishment. Â That said, I tried to make sense of it on my own. Here goesâ€¦

By way of a simplified explanation, sorta, approximately six months to ten years before the menopausal onset the brain signals the body to make gradual hormonal changes (Boice, 2007, p. 142). Many factors are involved with the hormonal transitionâ€¦ including the number of children produced, genetics, diet, stress, and a disturbing host of environmental influences. Once the menstrual cycle becomes irregular due to anovulatory cyclesâ€”or non-ovulating cyclesâ€”a womanâ€™s body produces less progesterone.

Still with me? I know! Itâ€™s not exactly inspiring reading, but letâ€™s keep going.

Less progesterone means the potential for numerous signs: mood swings, weight gain, and water retention (Lee & Hopkins, 2004). This phase is known as premenopause, or perimenopause, and can start as early as the mid-thirties in some women.

As time goes on, limited progesterone production leads to what is referred to as estrogen dominance. For many women a lack of progesterone and an excess of estrogen result in hot flashes, heavy menstrual cycles, memory loss, migraines, and loss of sexual desire. Yeah, not exactly the best ride at the carnival, but a ride nonetheless. Hang on because the spot where the camera flashes in your faceâ€”you know, right before the ride endsâ€”has yet to happen.

Once a womanâ€™s cycle has ceased for a full twelve months she has officially reachedâ€¦ta daâ€¦ menopause. Now the camera has flashed. The ride slows down a bit and you think, â€œI made it. Now Iâ€™ll get back to my old self.â€ But wait! The ride is still moving. Maybe itâ€™s even going a bit faster than before. Itâ€™s confusing. Itâ€™s exciting. The rush of wind peels off old beliefs and finds your core once again. Your â€œold self,â€ the one that was so near and dear, finds new clarity and reality.Â Â  Itâ€™s an amazing time of discovery and reawakening. Suddenly you not only want to stay on the ride, you realize you are in great company.

It is currently estimated thirty-eight million Baby Boomer â€”a name given to those born in the United States between the years 1946-1964â€” women are in perimenopause or have completed the menopausal passage. Thatâ€™s a lot of female wisdom and knowing. Put your arms up, trust the safety belt, and let the thrills begin!