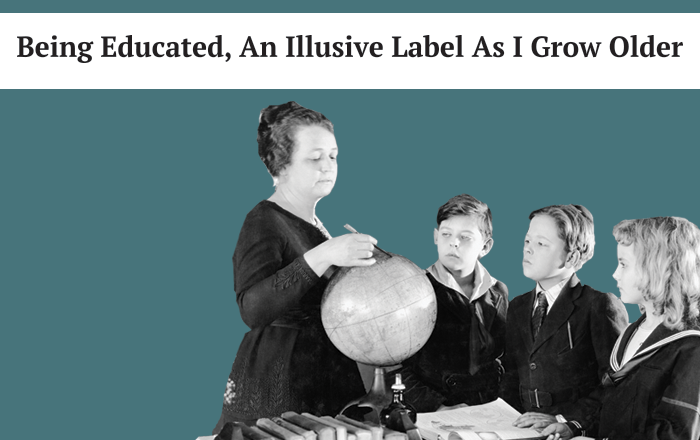 You are here: Home / Musings About Aging / Being Educated, An Illusive Label As I Grow Older

When I was a child, I discovered the joys of printing the alphabet on wide-ruled, unbleached paper that were so cheaply made it contained bits of wood that would catch my pencil lead and cause my carefully formed letters to go astray. I learned that if I practiced making the

letters reach the appropriate lines on the paper -solid lines for capital letters; dashed lines for lower case letters – my teacher would be pleased, and I would get a gold star to show my parents. I learned conformity was good.

As the letters began to stack together and form words, I learned that Dick and Jane played with a red ball and that their dog, Spot, could run. The students able to read without making mistakes were placed in the â€œAâ€ group and were elevated above the â€œBâ€ group, who had to stay inside for part of recess as a punishment. I learned to fear mistakes.

As grade school progressed, I took an interest in drawing pictures. For my third-grade parent-teacher conference, I created a sketch of my family and proudly hung it on the blackboard for my parents to see when they visited the classroom. Expecting praise and wanting recognition of my developing skills, I was crushed when my father said, â€œWhy did you get an â€œAâ€ for that? Teeth do not look the way you drew them!â€ I learned being creative could be painful if you see things differently than others.

As I entered junior high, I was thrown into a new mix of students because the rural school I had been attending was destroyed by fire. Hitting puberty and losing my student identity in one fell swoop left me desperate to understand the revised rules. On my first day of class, a fellow student explained who liked who, what clothing was considered acceptable, which students were undesirable, which students had teachers for parents, and how I might, or might not, fit into the scheme of things. I had never experienced leaving my homeroom to attend classes and felt like a lost, neon colored, lamb. I followed the students from location to location but felt as though all eyes were upon the new kid awash in Technicolor probation. Mentally I vowed I would learn to navigate the school ASAP so I could be a leader and not a follower. I learned to blend until I could lead.

High school brought the female traumas of dating, emerging poor body image, and gender bias. Classroom learning happened by default. I recall taking a class in car maintenance because I thought it would be useful to learn how to change the oil, replace a flat tire, and have a clue what was under the hood. There was one other girl in the class. She and I were told to stay out of the way as the guys worked on the cars. Once in a while, the teacher would give us a wink, hand us money, and ask that we busy ourselves by buying donuts for the boys. By the end of the semester, we had to earn a grade and test out on our learned mechanical skills. The teacher decided it would be best if the other girl and I worked together to figure out why the car would not start. It took us less than sixty seconds to see the gas gauge showed an empty tank. We earned an â€œA.â€

Business class was designed to teach studentsâ€”i.e. femalesâ€”how to become proficient at using adding machines, typewriters, and basic bookkeeping principles. The teacher, Mr. Stadeen, had a nasty habit of looking over the shoulders of the well-endowed students and down their blouses. When we complained to the administration about the leering, we received shrugs and smiles. We were told Mr. Stadeen was just a rascal. I learned being a female was about appearances and not about being taken seriously.

High school graduation meant going out on my own. After working a year as a waitress, I was accepted into St. Cloud State University. I had no idea what I was doing, just a fuzzy concept that this would make me employable at a potentially higher pay range. My parents had not attended college, my oldest brother had left home to join a religious commune, my next oldest brother had joined the army, and here I was about to dive in completely over my head. I met with an overburdened advisor that spat out a few suggestions before closing the door to his office so that he could steal a few moments of peace. Thus armed for the future, I attended classes without a clue of where I was going, or why. Getting decent grades was a corridor to graduation; not a road to an expanded world.

I recall going home to visit my parents on a break and sharing a classroom discussion. My parents shook their heads in dismay and told me it was ridiculous and dangerous to expose myself to radical thinking. (I was sharing teachings from Plato and Aristotle.) I learned I could leave home, but I could not bring the outside world back with me when I returned to visit.

Here I sit many years later, keyboarding on a home computer not even imagined when I was in college in the 1970â€™s. The question before me, the one Iâ€™m struggling to discern, is â€œWhat is an educated person?â€

My highlighted educational moments from the past speak to an ongoing process that has shaped who I am today but ignore the much bigger, brighter, side of who I want to become. I cannot conceive of the time that I will not fall asleep with a book in my hands for I have an unquenchable thirst to discover. I weeded out relationships that held me down and have flourished as a result. Other than a few family members that remain steadfast in the â€œfear of changeâ€ camp, I am now surrounded with people that uplift and encourage me even as they cultivate and tend their educational growth.

The words â€œbeing an educated personâ€ sound like a finished product. From the moment I took a pencil in hand, furrowed my brow, and printed the alphabet on grainy beige paper, I have never ignored the power of discovery. Just as learning to write the alphabet led to reading, and reading led to a voracious book habit; learning to ask questions has led to a lifetime of seeking answers.

Along the way I have discovered, and continue to discover:

What is an educated person?

I am still learning.