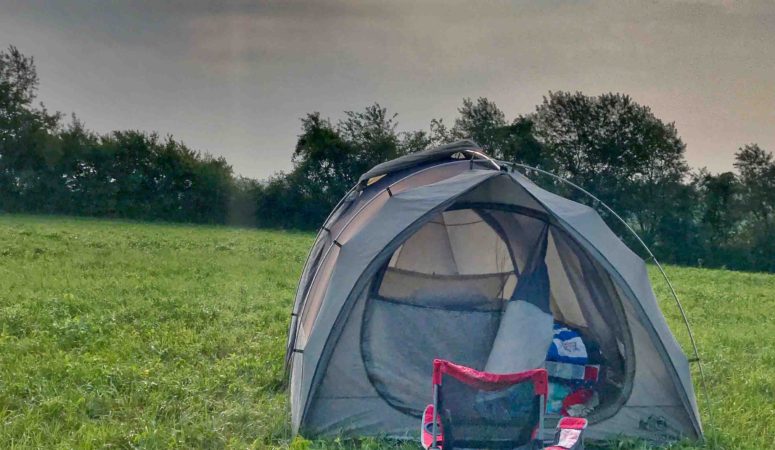 You are here: Home / Musings About Aging / Camp 80: A Love Letter To Life 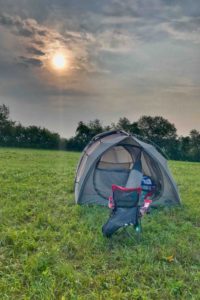 “But age became him as it did the oaks and the cedars.”
― Thomas Burnett Swann

That weird sound–almost one of flatulence–of fabric against inflated vinyl broke the silence. My husband, a man who felt his camping days were behind him, squirmed and stretched and ultimately snuggled into me on the air mattress. I felt the warmth of his body and enjoyed the way his hair smelled of wood smoke and disbelief. Through the screened roof of the tent, the full moon and flickering stars blessed us from the depths of a black velvet sky. Welcome to Camp 80, my love.

Twenty years earlier, when he turned sixty, we were in the blossoming stage of dating. Every meeting, every touch, felt vibrant and intoxicating. I thought my life had exploded into every possible kind of incredible.

As for him, well, he was joyful too, but started saying things such as, “Will you still love me when I’m doddering and using a drool cup?” “I don’t believe I will live past the age of 65. Are you sure you want to be with me? That’s not much time.“

I suppose those are common thoughts and fears when love happens later in life, but I didn’t want to hear them.

Bike rides, rollerblading, plays, movies, and concerts. It was all an adventure. I knew he loved camping–he had been an Eagle Scout for heaven’s sake– but it wasn’t my thing. When he’d mention going camping “sometime,” I would coax his thoughts elsewhere.

But! I can be good. I can compromise. Or is that “camp-pro-mise?” 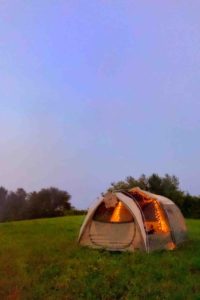 For his birthday that year, I snuck into his apartment with a green plastic tarp and tacked it to the ceiling over his bed. With a little squinting and a lot of imagination it sorta-kinda looked like a tent. I created a fake campfire out of a fan, red tissue paper, and sticks, brought in a few stuffed toy creatures to be our woodland guests and made a picnic style meal. On the wall was a rustic sign saying, Welcome to Camp 60.

When he came home from work that afternoon, he was delighted with my efforts, and we made the most of our “fake” campsite.

On his 70th birthday, I once again made sure we had a camp-themed day. Now married, our life continued to be adventuresome and romantic. We toasted the fact that he had NOT passed away at age 65, that there were no drool cups, and that we believed the future was ours to create. I once again made a rustic sign, this time reading Welcome to Camp 70, and hung it on the wall.

This past week my love turned 80. Almost blind-sided by another ten years disappearing, I wanted to make sure this birthday was extra-special.

One of my husband’s most favorite places on earth is Isle Royale, but I questioned going up there to camp. When I would test the waters to see how he felt by casually mentioning Isle Royale, sometimes he’d say he wished he could see it “one more time.” Other times he would say it was not likely. The supplies and packs we would need to carry are substantial, and his strength isn’t what it was. It’s also harder for him to get up off the ground, so the idea of using sleeping bags seemed unfeasible. What to do? 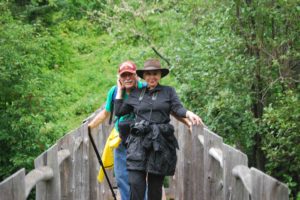 As his birthday approached, my daughter called and asked if she could do anything to help. I confided that I was a little stumped. How might I give him a camping experience that was user-friendly at this phase of life?

While brain-storming I blurted out something to the effect of, “Maybe we could put up a tent on your land? Except I’m not sure that we still have a tent.”

“We do,” said my daughter. And we were off and running.

The plan was to tell my husband that we were going to my daughter and son-in-law’s land for an evening picnic around the fire ring. (They own 34 acres of undeveloped land).  That was truthful. That was happening.

What I didn’t tell him was that my daughter and her husband were going to set up a tent with an air mattress. It was like a private meadow motel! 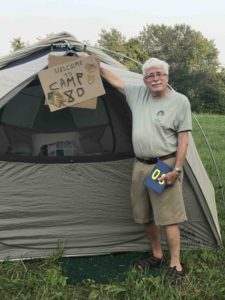 When my husband and I arrived at the land, my daughter met us and helped carry food to the fire ring. It was a little bit of walk, but as the sun faded into the soft blue of nightfall, I couldn’t help but feel the magic of the moment.

Rounding a wooded corner, we saw our son-in-law tending the campfire. Little motes of burning ash rose and danced skyward. And there, backlit against the sunset, was the tent complete with a Welcome to Camp 80 sign attached to the entry.

My husband stopped, stared, and then roared with laughter and pleasure.

“Guess where we are spending the night?” I said.

His tear-filled eyes were all the answer I needed.