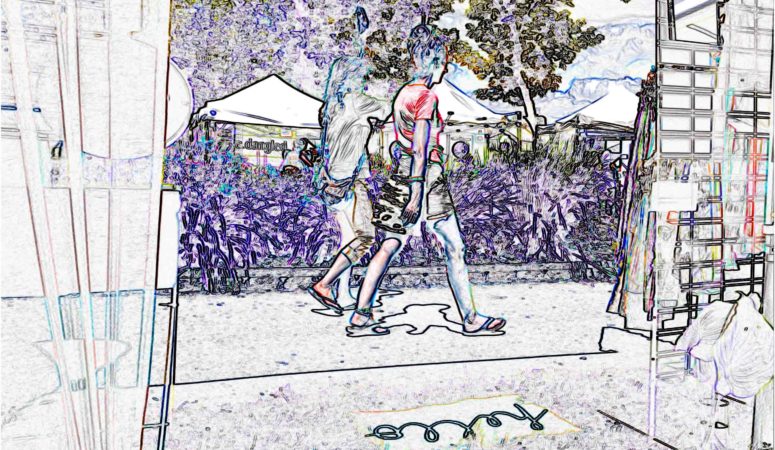 You are here: Home / Musings About Aging / Why Am I An Artist? A Moment Of Discovery 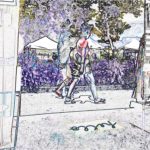 View from the art booth

“I am an artist you know … it is my right to be odd.”
― E.A. Bucchianeri, Brushstrokes of a Gadfly

Twenty minutes. It was nearing the end of a two-day art fair and my husband was getting antsy to start packing up. That’s pretty much the worst part—tearing down when you’re exhausted/hungry/thirsty/exhausted.

I give my love the stink eye because he “accidently” puts a photograph in its bubble wrap, followed by tucking away a stack of greeting cards.

“Hey! We’re not supposed to shut down until AFTER the advertised hours,” I say. “The organizers get cranky when artists close early and I’m not in the mood to deal with cranky.”

He exhales a martyred breath that lasts fifteen seconds, easy. It reminds me of deflating one of those big exercise balls I have around the house but never use.

“Okaaaaaay. But I’m ready to go home,” he says. Yep. Got that, sweetie.

A short while later an older woman stands in the opening of my booth. She had been flipping through the rack of matted photos but now gazes at the framed works inside.

She’s a slight woman. Frail? She walks with a cane and yet there’s determination in her movements. Maybe she’s out for a late afternoon stroll, I muse. She doesn’t strike me as a shopper.

“Tell me about your photography,” she says. “I’m fascinated.” As if to emphasize her point she backs up, tilts her head to the side, squints at my images, and then returns.

I explain that I layer my photography in iPhone apps until an image emerges that resonates with me…and I hope…others.

Her eyes hold on an 8 x 10 water lily photo. “I love this one to the point that I keep staring at it. It reminds me of stained glass. Do you have it without a frame?”

“No,” I say. “I created it shortly before the show and it’s the only one I have with me.” 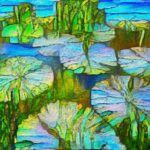 She frowned. “How much is it, framed?”

It was then I realized I hadn’t set a price on it. Normally I print out the title, description, paper used in the printing process, and price. Why had I missed that detail this time?

Judging people is wrong. And yet there was something about the woman that melted my heart. The longing in her eyes was palpable.

“Well, since I failed to put a price on it, would you be willing to pay ____?” It was less than half of what I would normally ask, and therefore I was, of course, losing money. My husband raised an eyebrow but said nothing. He’s the one who balances the checkbook.

While I wrapped her photograph she told me she’d been out of work for over a year due to health issues. “My budget has been so tight that I haven’t been able to buy nice things. I’m just starting back to work now. Part of my job is via Skype. Your photo will be on the wall right behind me so everyone can see it!”

As she walked away—cane in one hand, my photo in the other—I felt inexplicably happy. Yes, I had lost money. Again. But that moment of connection through my art was… indescribable.

“That was really nice of you,” said my husband with a suspiciously thick voice.

“Let’s pack up and go home,” I said. “I can’t imagine ending this day any better.”